One Final Look at an Extraordinary Weekend

From January 16-18, over 1,200 people came together in New York City to commemorate the 25th anniversary of the SEA network. The celebration spanned three days, but the Saturday night gala was the high point. With over 1,200 people in attendance and a record-breaking $3.2 million raised, it was an inspiring evening. 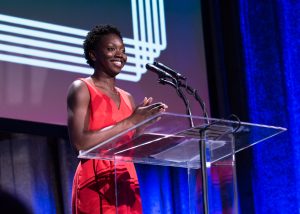 The evening’s presentation featured remarks from SEA Board Chair Amrit Kanwal, Executive Director Tim Wyant, and StreetSquash graduate Rakey Drammeh, with John Nimick as the Master of Ceremonies.  “I believe this movement is the single most important development in the sport in our lifetime,” said John, a longtime friend of the network and SquashBusters’ founding Board Chair.

“As I reflect on this anniversary, and what makes the programs in the SEA network so extraordinary, I think about the importance of networks,” stated Rakey Drammeh. “I think about the friends I’ve made from the Bronx, from Boston, from Philadelphia, and how they have enriched my life. Those networks are only getting wider as younger SEA participants connect with students from Detroit, Oakland, and even Colombia.”

In addition to the gala dinner, SEA hosted a VIP Reception at the J.P. Morgan Tournament of Champions, sponsored by Ropes & Gray, a Leadership Assembly and Reception at the Yale Club, and a Legends Showdown tournament at StreetSquash’s eight-court facility in Harlem.

Gala proceeds will enable SEA to grow and strengthen our network by helping launch organizations in new cities, expanding the educational and squash opportunities we provide to  our students and alumni, and improving the quality of programming across member organizations.

On Friday, January 17, SEA hosted its annual Leadership Assembly at the Yale Club, a day-long conference for 150 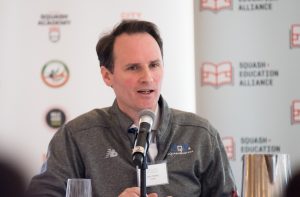 executive directors, board members, senior staff, and supporters of SEA and our member programs. Over the course of the day, attendees had the opportunity to hear outcomes and metrics from across the network, reflections from founder Greg Zaff, and a Q & A with John Palfrey of the John D. and Catherine T. MacArthur Foundation. Attendees participated in breakout sessions on topics such as fundraising, squash excellence, and career readiness.

“The purpose of today is to connect, to learn from each other, and to share best practices,” said Brooke Cooper, a member of SEA’s Board of Directors who kicked off the day. “Hopefully you all walk away with some really tangible and specific things you can bring back to your own programs to serve your students.”

The SEA staff began the day’s presentations with a report on the state of the network, what SEA and our programs are doing well, and where we can improve.

This year’s Assembly was unique in that it featured many speakers from organizations and educational institutions outside of the SEA network. John Palfrey was the Assembly’s keynote and spoke in a Q & A with Tim Wyant about topics such as diversity, equity, and inclusion, student safety, and philanthropy.

A panel on foundations featured Ambika Kapur from the Carnegie Corporation of New York, Patrice Cromwell from the Annie E. Casey Foundation, and Lauren Coape-Arnold of Apollo Global Management. Patrice, Ambika, and Lauren shared their perspectives on building relationships with funders, diversifying revenue, and more.  Other leaders in sports-based youth development shared their insights and expertise with our network, including Devin O’Brien, Executive Director of Harlem Lacrosse New York, Amanda Kraus, Founder and CEO of Row New York, and Andrew So, Executive Director of South Bronx United.

“It was incredible to see how staff, board members, and friends of SEA used the Assembly to really dig into network data and have deep conversations about opportunities for growth and exploration,” said SEA’s Director of Program Support and Evaluation Jennifer Sewell. “Equally inspiring was having alumni voices foster conversations for the network to continue to embrace diversity, equity, and inclusion in all forms.” 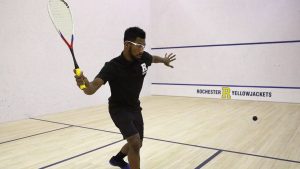 This year, 468 students from the SEA network are enrolled at colleges and universities across the country, 53 of whom play varsity squash. SEA’s college squash players hail from 10 member programs and compete for 17 different colleges and universities. This year, Connecticut College tops the list with 11 players from our network on the men’s and women’s teams, followed by St. Lawrence with eight players, and Hobart and William Smith and Mount Holyoke each with six SEA players.

“Our SEA students have made tremendous contributions to our squash teams, both on and off the court.” said Connecticut College Coach Mike MacDonald. “They work hard and compete at a very high level on court. Beyond squash, they are ambassadors for our program around campus and beyond.”

“Being on a team with other SEA students is like another family,” said Makyla Kelly, a sophomore at St. Lawrence University and alumna from Chicago’s MetroSquash. “Even though we come from different SEA teams we can all relate to one another in different aspects. Learning about someone’s life that is similar to yours makes the environment more comfortable and home like.” Makyla plays in the No. 2 position for the Saints and was named Liberty League Player of the Week in January.

Not only are many players from our network both teammates and opponents, CitySquash graduate Chris Fernandez is the coach for two Squash Haven alumni — Jocelyn Feliciano and Osuman Imoro — at Dickinson College.

Last month, Apple TV released a series titled Little America which highlights the stories of immigrants in the U.S. The series is based on a collection of stories published in Epic Magazine. The episode “The Jaguar” follows an undocumented high schooler named Marisol who takes up the sport of squash. The episode is inspired by the experience of Reyna Pacheco, a student from Access Youth Academy, SEA’s member program in San Diego.

“I initially had little interest in learning to play a sport so foreign to me, but in a lot of ways squash provided me with 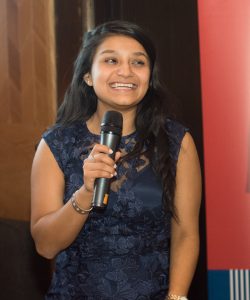 something I really wanted,” said Reyna. “The sport gave me the opportunity to compete and to be solely judged on my performance rather than the neighborhood I grew up in, the color of my skin or the statistics published about my likelihood to even attend college.”

Reyna was born in Mexico and moved to the U.S. when she was four years old. She joined Access Youth Academy and ultimately went on to play squash at Columbia University and later on the professional tour. “Reyna has always been an inspiration to us all,” said Renato Paiva, Executive Director of Access Youth Academy. “She has worked very hard on and off the court for many years and this episode shows a special part of her incredible journey.”

Today, Reyna works as an Analyst at Goldman Sachs and is on SEA’s Professionals Board. “I was on my way to work yesterday and as I looked up I saw the big billboard of my episode right in front of me,” recalled Reyna. “Since I was a little girl I have seen my family share and be kind to everyone around them. I’ve seen them work so hard and sacrifice a lot for me. I have mentors who keep tabs on me and make sure that I stay on my toes and that I am excellent. When I saw the billboard it was just a reminder that their efforts and my belief in the impossible matter.

There was a point in life where I finally became less scared of dreaming very big, and one of my dreams was that a squash player would have their billboard somewhere in NYC one day – I certainly never imagined that it would be about my story!”