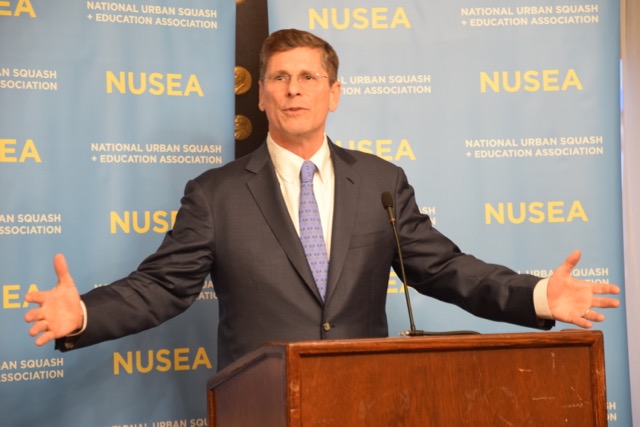 On May 18, supporters of urban squash gathered at the University Club in New York City to honor William E. Simon, Jr. who stepped down as NUSEA’s Founding Board Chair after eleven years in the role. A resident of Los Angeles and former star on the Williams College squash team, Simon has helped lead the growth of urban squash from its inception to include eighteen accredited programs in the United States and four abroad today. An award in Simon’s honor was created and endowed that each year will give one college graduate from an urban squash program the opportunity to go on a service trip abroad to volunteer at an international affiliate program of NUSEA. 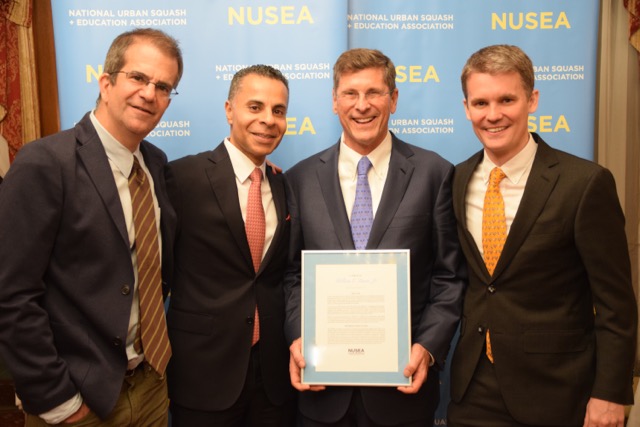 Simon has been involved at every level of urban squash, from supporting SquashBusters in its infancy to chairing Urban Squash’s 20th Anniversary Gala in 2015 to getting on court with children last month in Cartagena, Colombia. 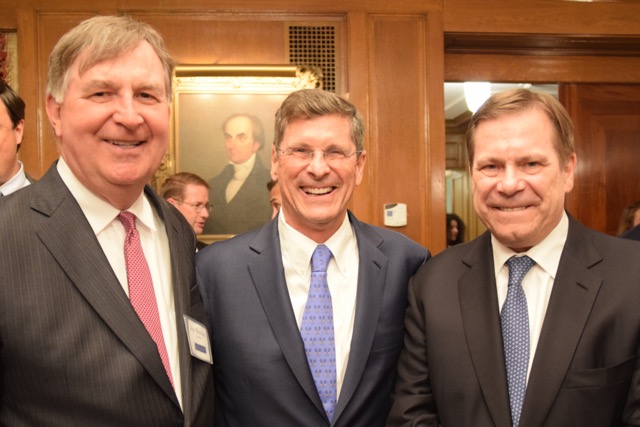 In New York, Greg Zaff, the founder and CEO of SquashBusters and a co-founder of NUSEA, spoke of the first meeting he had about SquashBusters with Simon over a deli sandwich in 1996. At the time, Simon told Zaff, “If you decide someday to make this national, let me know if I can help.” Almost a decade later, Zaff and the leaders of the nation’s other urban squash programs came together to form NUSEA. As they considered who would be the best person to chair the organization, Zaff knew who to call.

Since then, Simon has led NUSEA with unbridled determination and optimism, taking NUSEA from an organization with four member programs to a governing body whose member programs and affiliates enroll more than 2,000 students year-round. “Bill has been a wonderful leader of NUSEA,” said NUSEA Executive Director Tim Wyant. “We would not be where we are without his devotion to the cause and his incredible generosity.”