In an effort to support squash excellence among its programs, NUSEA hosted 100 students for three Squash Squads this summer at Deerfield Academy, University of Virginia, and Stanford University. UVA Coach Mark Allen and Stanford Coach Mark Talbott led the UVA and Stanford Squads, respectively, and Squash Haven’s Squash Professional Owen Butler led the Deerfield Squad. Students were nominated and chosen for squads based on skill level, work ethic, and dedication to the sport of squash. SquashWise’s Malia Carter, a rising junior, was the sole student to earn admission to all three squads. “My favorite part was meeting new people and learning new squash techniques and skills,” said Carter. “The experience of learning from college coaches and being recognized by people all over who can help you get into that college is amazing. It benefits you in the long run and gets you ready for the life you want.” 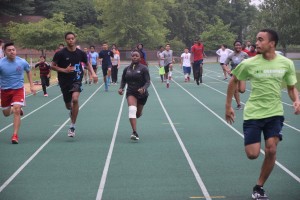 Morning workouts at the Deerfield Squad

On Monday, June 27, 47 elite urban squash players arrived at Deerfield Academy in Massachusetts, for an intensive four-day training camp, led by Owen Butler, a Squash Professional at New Haven’s Squash Haven program. “I was thrilled with the level of focus, energy and open-mindedness each student brought to their sessions,” said Butler. The students played in Deerfield’s 10-court facility and did morning workouts around the iconic green track. In addition, the Eaglebrook School provided another six courts for practice. “Deerfield Squad definitely helped me improve in my squash game and made me fitter,” said CitySquash rising sophomore Victoria Haghighi. “The faculty helped me push through tough moments.”

On the third day of the camp, the middle school boys had a campus tour and shared lunch with Eaglebrook’s History Teacher and Admissions Officer Karl Koenigsbauer. Students also had the opportunity to take an official campus tour of Deerfield and meet with the Associate Director of Admission Dana Emerson. 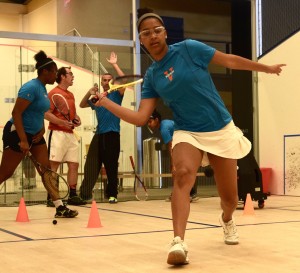 Two weeks later, on Monday July 11, 24 students found their way down to Charlottesville, Virginia to train at The Boar’s Head Club McArthur Squash Facility with former U.S. National Team Coach Mark Allen. “The UVA squash center at the Boar’s Head is probably the best coaching facility that I have ever experienced,” said UVA Squad Coach and SquashWise Squash Director Zach Bradley. “It seemed as if we had every coaching tool at our fingertips including ball machines, TVs and iPads at every court to time drills and notify students and staff of when it was time to rotate.”

After long sessions of focused drilling and game-play on court, students got to jump around at a trampoline park, challenge each other at bowling, and visit Monticello, President Thomas Jefferson’s former plantation. “We host a lot of great events here at Boar’s Head, but hosting the NUSEA players for a week of summer camp is undoubtedly one of the highlights of our annual squash calendar,” said Allen. “We thoroughly enjoy seeing the kids have fun and the coming together of the players from across several different programs. It’s a very rewarding week for both players and coaches alike.”

On the first of August, students from the West and East coast met in San Francisco for the Stanford Squad. Stanford Coach and former World No. 1 Mark Talbott led the week’s training sessions. “I think being at such a prestigious university gives the students an idea of what they could accomplish,” said Stanford Squad Coach and SquashDrive’s Squash Coordinator Pamela Larromana. “The squad is a little taste of what they’re working hard for, and it shows the tangible elements – like staying in the dorms, eating at the dining halls, receiving high-level coaching – of what college offers. It grounds the students in many ways.” 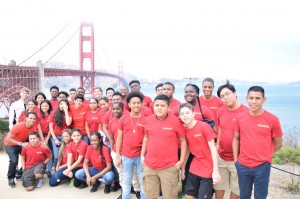 As an afternoon break from squash training, the Stanford group took a tour of San Francisco, visiting the Golden Gate Bridge, Lombard Street, Fisherman’s Wharf, and Ghirardelli Square. “It was an unbelievable experience. I never got to go this far as a kid,” said Stanford Squad Coach, CitySquash Director of Squash and CitySquash Alumnus Chris Fernandez. “It’s been a fun journey with my students Karla and David, who haven’t been to California before.”

Summer Squash Squads provide that special opportunity for exceptional players across the nation to come together and learn from experienced coaches as well as each other. For more information on squads, visit our Squads page.

View photos of the squads on our SmugMug account.
See a video of the UVA Squad on our YouTube channel.