The third annual Urban Squash Citizenship Tour brought 22 civically-minded high school and college students from 11 NUSEA member programs to New York, Philadelphia, and Washington D.C for an inspirational academic and athletic journey. From July 6-13, students met with Supreme Court Justice Elena Kagan, Deputy Attorney General Sally Yates, Senator Al Franken, Senator Kirsten Gillibrand, Senator Heidi Heitkamp, Congresswoman Stacey Plaskett, and NBC Nightly News anchor Lester Holt to learn about their careers and to highlight the importance of public service and civic engagement. “The Tour is one of the most important events that NUSEA organizes each year,” explained NUSEA Executive Director Tim Wyant. “In addition to bringing together students from across the country, it highlights the value that our member programs place on community service and encourages the 2,000 students enrolled in our programs nationwide to think about the ways that they can make a difference in their communities.”

The eight-day trip incorporated enriching sightseeing in each city with tours of the New York Times building, NBC Studios, and the National September 11 Memorial & Museum in New York City, an MLS soccer game in Philadelphia, and visits to the U.S. Capitol, the White House, and other monuments in Washington, D.C. 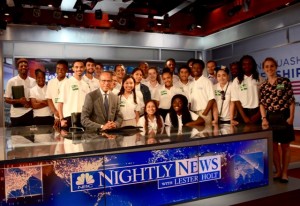 The initial three days in New York City started with a focus on community service and journalism. After meeting each other in Central Park, the students hopped on court at StreetSquash Harlem and learned about the history of urban squash from StreetSquash Executive Director George Polsky and NUSEA Executive Director Tim Wyant. The next day, participants engaged in a panel and Q&A session with NBC Nightly News Anchor Lester Holt at NBC Studios. “I was impressed with his poise and great humility, and the way he shared about the pressures of being the first African-American lead anchor,” remarked SquashSmarts’ DuBois Stewart. The group later got a glimpse into the life of a New York Times journalist with a private tour of the newspaper’s office and meetings with reporters David Segal, Rachel Abrams and Nikole Hannah-Jones.

Another New York City highlight was the trip to City Hall to meet with Deputy Mayor Richard Buery and Commissioner of Immigrant Affairs Nisha Agarwal, in which the group engaged in discussions surrounding the “American Dream” and immigration reform. In a session addressing gender rights and equality, the students shared lunch with Barbara Ortiz Howard, the co-founder of the “Women on 20s” campaign, which fought to put Harriet Tubman on the $20 bill.

After a brief stop in Philadelphia, where the students slept over at the SquashSmarts facility and took in a Philadelphia Union Major League Soccer game, the Tour was off to our nation’s capital for a busy schedule of gatherings with leaders in politics, law and government. 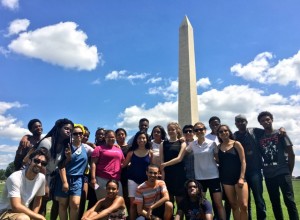 The Tour group in front of the Washington Monument

In a meeting that made urban squash history, students sat down with Justice Elena Kagan for nearly an hour to learn about her role as a member of the Supreme Court. She spoke candidly about her position on the Second Amendment, her relationships with her fellow Justices, and openly answered student questions. Following that meeting, the group met with Deputy Attorney General Sally Yates, U.S. Senators Franken and Heitkamp, and even played squash with Senator Gillibrand. Squash Haven’s Tiffany Cervantes especially enjoyed the session with Senator Gillibrand as it opened her eyes to the Senator’s work on campus sexual violence. “We should be grateful to have people like her in such an important position, who care about future generations of college students and their safety,” Cervantes noted.

To let loose during their time in D.C., the Tour participated in a squash hit-around hosted by George Washington University and engaged with urban squash supporters at the Tour Reception at the University Club. Congresswoman Stacey Plaskett of the U.S. Virgin Islands gave an uplifting keynote address that resonated with our guests and students about the power of athletics and public service. Students shared trip highlights with attendees and then joined in a squash exhibition match with pros Ahmad Alzabidi and Mubarak Mohsin.

After eight days of learning and sightseeing, the 22 Tour participants returned home with inspiring stories to share and memories that will last a lifetime.

See the photos on NUSEA’s SmugMug.
Read the participating students’ Tour Blog.
Read what the Baltimore Sun had to say about the Tour.