The Booster Scholarship seeks to help bridge the gap between college financial aid packages and the cost of attendance, enabling high-achieving SEA students to attend their best-fit college or university. Scholarship winners are chosen by a selection committee and demonstrate strong intellectual curiosity, leadership, and tenacity. Through the Booster Scholarship, SEA aims to offset some of the expenses students incur while at school that often go unnoticed, such as textbooks, technology, dorm supplies, transportation, and food. With the support of this up to four-year scholarship, students have the freedom to more fully engage in the educational and social experience, empowering them to achieve their goals and impact their communities. 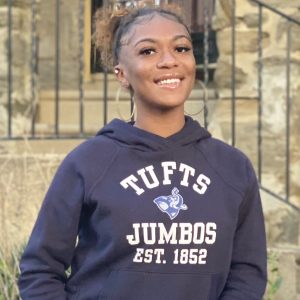 Alliyah is a member of Philadelphia’s SquashSmarts and will be attending Tufts University to study mechanical engineering. Alliyah joined SquashSmarts in sixth grade and, in addition to participating in the program, was a member of the Friends Central School Varsity Team and Cheerleading Squad, President of the Youth Choir, and Vice President of the Junior Usher Board at her church. “No one in my family has received a PhD, so my goal is to be the first person to do so. This will not only inspire family younger than me to try harder, but show myself that hard work pays off in the end,” says Alliyah. 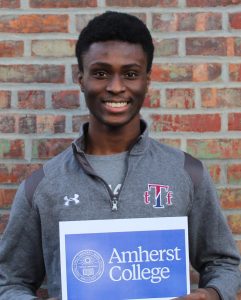 esse is a member of CitySquash in the Bronx and will be attending Amherst College in the fall, where he plans to play squash and study economics and computer science. Jesse is a graduate of Taft School, where he served on the typing club and debate team, and played squash, soccer, and ran track. “I am really proud to have been a CitySquash team member for 10 years,” says Jesse, who joined the program in third grade. “Without the help of my program I would have no direction or purpose to fuel my ambitious mind.” 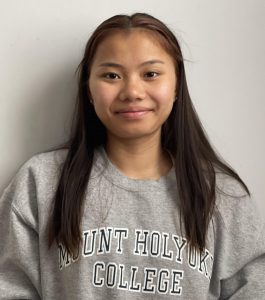 Ku is a member of Hartford’s Capitol Squash and will be attending Mount Holyoke College, where she hopes to study computer science, volunteer in the community, be a tour guide, and study abroad. Ku joined Capitol Squash in fifth grade and is the first person in her family to go to college. Ku attended Ethel Walker School for high school, where she captained her varsity squash team and was vice president of her senior class. With the help of the Booster Scholarship, Ku says she “will be focused on utilizing everything that is presented to me and working towards accomplishing my dreams and my goals of giving back to my parents and the communities that have done so much for me to be where I am today.” 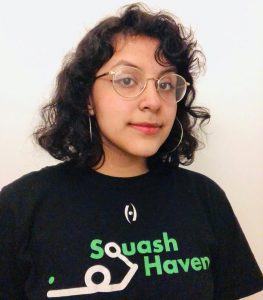 Yareli is a member of Squash Haven and attends Amherst College. Yareli joined the New Haven program while in high school and, in addition to her commitment to her squash program, has been involved in various art, mental health, and education focused extracurriculars. A member of the National Honor society, Yareli has served as Fellow in New Haven’s Arts & Ideas Festival, volunteered at New Haven Public Schools’ summer school, participated in Yale University’s Women’s Leadership Program, and works as a program assistant at ARTE Inc, a local youth enrichment program. The first in her family to go to college, Yareli is interested in studying psychology at Amherst, conducting research, and joining the college’s Latinx club, with the ultimate goal of becoming a therapist. “As the oldest in my family, I am really proud that I have not only worked hard to achieve things for myself, but to set a great example for my younger brother,” Yareli shares. “At Amherst, I want my education to be about more than just the classroom. I want it to be socially and culturally enriched by the connections I develop with peers and professors through a variety of organizations, from club sports to art clubs to cultural affinity groups.” 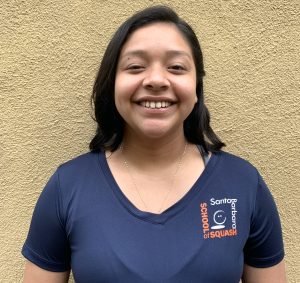 Patty has been a member of Santa Barbara School of Squash since the fourth grade and attends the University of California, Santa Barbara. She was the captain of her SBSOS squash team, student body president of her high school during her sophomore and junior years, and has worked with youth as a counselor at a local United Way summer camp. Patty is the first in her family to go to college and is interested in studying mathematics at UC Santa Barbara and starting a club squash team. She also plans to explore volunteer opportunities in nursing and teaching. “I value helping people and aspire to become a nurse or a teacher using my bilingual language skills to help the underserved community that I have grown up in and feel very connected to,” Patty says. “I hope to be a role model for my younger brothers and other Latinas, and demonstrate that it is possible for all to get a higher education.” 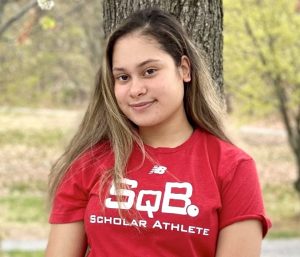 Sarai is a member of SquashBusters Lawrence and attends Trinity College. Sarai joined SquashBusters in the sixth grade and plans to study political science. She is a member of the National Honor Society, served on the Lawrence Public Schools Superintendent Council, and has volunteered with Cor Unum, a local meal center. Sarai hopes to study in another country while at Trinity and has expressed interest in working in law after college. “Family and education has always come first,” Sarai says. “I will continue to further my knowledge so that I can serve as a better resource for others and make positive changes in my communities.” 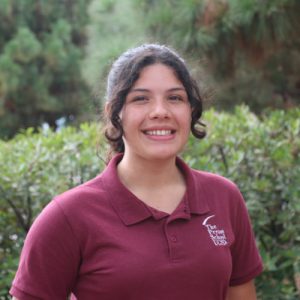 Gicel is a member of San Diego’s Access Youth Academy and attends the University of California, Davis, where she studies mechanical engineering. Gicel joined Access Youth Academy in eighth grade. She was an honor roll student throughout high school, volunteered with The Hunger Project and Palmer Way Elementary, participated in Model UN, a mentorship program with MANA de San Diego, and the Robotics Team. She grew up in a Latino, single parent household. “My family has always instilled in me the importance of education,” she shares. “I am proud of being the first in my family to go to college and setting a precedent for my siblings to follow me in my footsteps.” While at UC Davis, Gicel hopes to join the Model UN and Robotics Club and study in a different country. 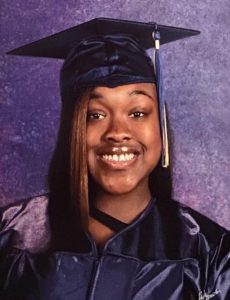 Tahneja is a member of Urban Squash Cleveland and attends Case Western Reserve University, where is working toward her goal of becoming a doctor. In addition to helping out at Urban Squash Cleveland as a mentor to younger students, Tahneja participated in the Neurological Inquiry Seminar Series at Case Western Reserve University, working on research with professors and students. She also took part in a selective, three-year, five-week STEM summer program at Phillips Academy Andover, (MS)2 . Tahneja is a member of the National Honor Society and will be the first person in her family to go to college. “In the next 10 years, I see myself beginning my career as a doctor, buying my first house, and starting my own family,” says Tahneja. “This journey to achieve my future goals all starts with obtaining my undergraduate degree.” 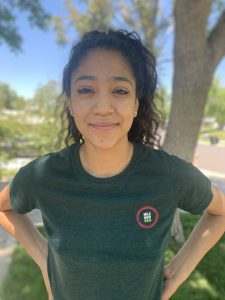 Wendy is a member of Denver’s Mile High 360, which she joined in ninth grade, and is attending the University of New Mexico to study film production and sociology. Wendy has interned at the Denver Center for Performing Arts and worked alongside two local filmmakers in the past several years, helping with everything from setting up gear to assisting with translations and post-production. She is excited to join a new community and continue on her path to working in cinema. “I want to create films that tell the stories of humans I have never met,” she shares. On top of managing schoolwork and internships, Wendy helps take care of her four siblings. “With this scholarship, I can hopefully have a part-time job instead of a full-time job, putting that extra time into my classes.” 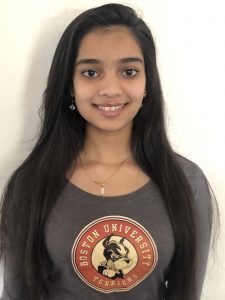 Krishna joined Connecticut’s Squash Haven seven years ago, at age 11. She attends Boston University and plans to study human physiology, with the ultimate goal of becoming a cardio thoracic surgeon. Krishna is the first person in her family to go to college. A committed student, Krishna is a member of the Richard C. Lee National Honor Society, the National Society of High School Scholars, and the National Latin Spanish, and Math Honor Societies. She has participated in Girls Who Code and captained a Robo Squad. Krishna looks forward to the opportunity to travel to London during her time at Boston University.  “The SEA Booster Scholarship will empower me to live out the college life that I have envisioned for myself,” says Kirshna. “I want to conduct research alongside my professors, compete on the BU squash team, and participate in internship opportunities in Boston.” 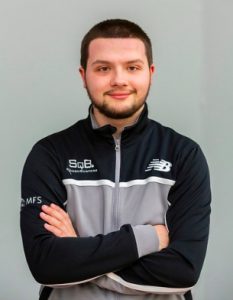 Cameron joined SquashBusters Boston in seventh grade and has been with the program for five years. He attends the University of Massachusetts – Amherst and plans to study biology and geology, with the goal of becoming a paleontologist. Cameron is described by his mentors as “talented, hardworking, and considerate.” During his high school years, he spent a summer at Brown University studying molecular biology, participated in a month-long backpacking trip through Summer Search, and took part in a peer leadership program through the Department of Public Health. Cameron hasn’t missed a day at SquashBusters since his sophomore year and often spends his free time coaching and volunteering with younger students. “Simple things, like supplies, are a luxury my family cannot afford. This scholarship will help alleviate these concerns and allow me to focus on obtaining my degree,“ says Cameron.