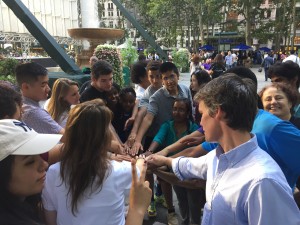 The Tour participants, who traveled from 10 cities across the country to be a part of the trip, met each other and our staff in New York City. They played squash with Pulitzer Prize winning journalist David Segal and StreetSquash founder George Polsky, toured the New York Times Building, took a boat to the Statue of Liberty and Ellis Island, visited the 9/11 memorial, and met with NYC’s Commissioner of Immigrant Affairs Nisha Agarwal. 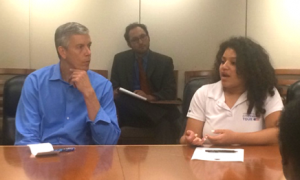 Next was Philadelphia, where the group attended a Philadelphia Phillies game, meeting the players on the field before watching from a box above. After checking out the Liberty Bell at Independence Hall, the students made their way to Baltimore and spoke with urban poet D. Watkins and Congressman Elijah Cummings. The Baltimore Sun published a terrific article about it. 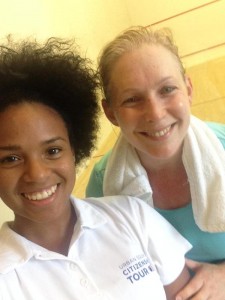 DC was the climax. In addition to seeing the monuments, attending a reception at the Metropolitan Club, and touring the U.S. Capitol and the East Wing of the White House, the students met separately with, among others, Secretary of Education Arne Duncan, Assistant Secretary of Financial Institutions Amias Gerety, and U.S. Senators Kirsten Gillibrand, Al Franken and Heidi Heitkamp. Cris Margaret Frias, a senior at Franklin & Marshall and alumna from CitySquash in the Bronx, got to play a squash match with Senator Gillibrand. Emma from StreetSquash wrote in her blog, “Everyone that we met on this trip stressed so much that it’s up to my generation to make the change we want to see happen. Talking to high power government officials has made me deepen my knowledge on what steps I can take to make the world better and what I can do to help others that can’t help themselves.”

Throughout the eight days, the students reflected on the idea of citizenship and discussed public policy, all with a focus on  how they can make a difference in their communities. “I felt valued,” wrote Johnny, a high school student from San Diego, in a blog. Among other things, the trip pushed Johnny and the other students to think about how they could “share our skills with our homes and neighborhoods.”

Read the Department of Education‘s post on Urban Squash. Also, see the Citizenship Tour smugmug gallery and blog for more photos and stories of the Tour.