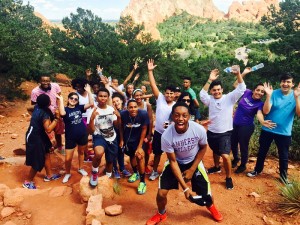 Students hiked a mountain in the Rockies during their off-time

For the fourth year in a row, US Squash organized and funded the Urban Doubles Camp in Denver, CO, which took place from August 3-7. Our 18 players learned hardball doubles at the Denver Athletic Club with pros Suzie Pierrepont, Victoria Simmonds, Graham Bassett, and Preston Quick. We were also thrilled to have Colorado’s Governor John Hickenlooper jump on court for some friendly competition with our players as well.

Students from six NUSEA programs traveled to the Rockies this year: Impact360 (previously called Mile High Squash), SquashSmarts, SquashWise, StreetSquash Harlem, CitySquash Bronx, and MetroSquash. “This was one of the best years we’ve had so far,” said Graham. “We had a great group of kids, and a great group of coaches. Some of the best doubles players in the world were there.”

This year, Cristian Escalona and Maria Serrano from CitySquash won the mixed doubles division. For the first time though, CitySquash was dethroned in the other divisions. Emma Montero and Nakayla Taylor from StreetSquash Harlem won the girls division, and Carlos Marks and Darian Rich from SquashWise won the boys division.

Off court, our players took advantage of Colorado’s great outdoors. They went whitewater rafting, walked through the Garden of the Gods, and visited the United States Olympic Committee headquarters.

For more photos of the Denver Doubles week, please check out our smugmug gallery!