Students from as far as Colombia Travel to Amherst, Williams and Kenyon for Summer Tournaments 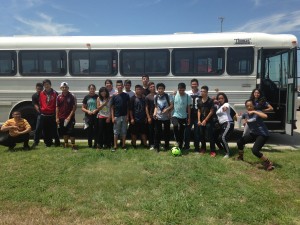 Impact360 players arrive at Kenyon after driving for two days from Denver, CO

This summer, urban squash tournaments had a record number 700 participants from across the country and the world compete for championship plates. Amherst and Williams Colleges were flooded by 450 players for our 13th Annual Urban Individual Nationals. Our Midwest Regionals Tournament at Kenyon College in Gambier, Ohio, welcomed over 100 players. Even our older urban squashers joined in the competition, as 120 college students and alumni returned for battle at Alumni Nationals hosted by StreetSquash Harlem.

On June 19, the summer tournament season kicked off at Urban Individual Nationals, and players traveled from far and wide to attend. Impact360, our Denver Colorado member, drove two-12-hour days in a school bus to make it to Massachusetts. Squash Urbano Colombia, our international affiliate in Cartagena, made their first international trip for Urban Individual Nationals. 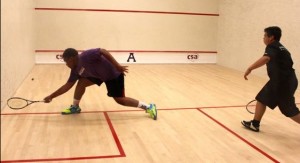 Players at Individuals fought for every point

Results from this year’s A division swung heavily in favor of our older East Coast programs, as CitySquash, Squash Haven, and Street Squash took home the championship plates. CitySquash’s Tyla McKenzie, competing in the GU17 division, won her third consecutive Urban Individual’s title. The other girl champions were Squash Haven’s Ashley Sanchez (U19), Bethany Turnage (U15), and Karen Escalera (U13). Champions for the boy divisions were Squash Haven’s Michael Rodriguez (U19), StreetSquash’s Richard Fagan (U17), CitySquash’s Dylan Ram (U15) and Caleb Boeteng (U13).

Off court at Williams and Amherst, students were recognized for their work submitted for the art and creative writing competition. This year’s prompt drew inspiration from Time Magazine’s “Person of the Year” edition and asked students to create work on the “Person of the Year” in their life. We also celebrated the winners of our Future Stars Award and Tyler Griffin Urban Squasher of the Year Award. The awards recognize the consistent commitment of a 7th or 8th grader and two graduating seniors, to the overarching values of urban squash: sportsmanship, effort on court and in the classroom, respect for and concern about other people, integrity, character and leadership. This year’s Future Stars winner was Kaetu Wieh from SquashBusters. The Tyler Griffin Urban Squasher of the Year winners were Kevin Le from Access Youth Academy and Yazmynne Carter from MetroSquash. 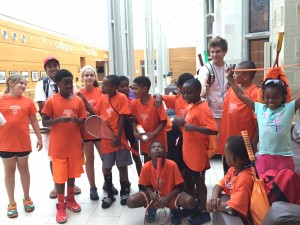 In Gambier, Ohio, Kenyon College’s campus came alive during the weekend of July 24-26. The Midwest Regionals team event featured competitors from Racquet Up, SquashSmarts, CitySquash, MetroSquash, Urban Squash Cleveland, Impact 360, SquashWise, and SquashDrive. Impact360 drove its players in a school bus for two days to play in the tournament. Impact360’s Squash Director, Otto Schlosser, told us “it was exhausting, but the kids handled it great.” 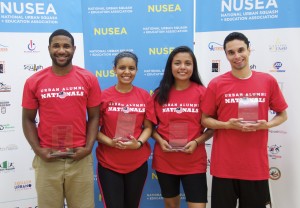 The 3rd Alumni Nationals was held August 7-9 at StreetSquash Harlem and included a mix of competitive team play, learning opportunities and fun reunions. 120 college students and alumni gathered from StreetSquash, SquashBusters, CitySquash, SquashSmarts, Squash Haven, MetroSquash, and Squash Haven. This year’s winners were Seetreeon Torres, Richard Brown, Alexandra Matamoras, and Jazmin Matos in the Blue Division, and Aaron Coss, Carmelo Reyes, Lisa Imafidon, and Rony Gomes in the Red Division. “It was inspirational to see so many of our college students and alumni together in one place – reuniting, playing squash, learning, and making lasting memories,” said NUSEA Director of Academic Programs & Alumni Support Alana Lerner. “I can’t wait to see this event grow in the years to come.” 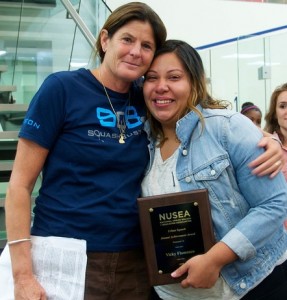 During the weekend, we proudly awarded SquashBusters alumna Vicky Flamenco with the Alumni Achievement Award. The award recognizes one outstanding alumnus/alumna per year who has demonstrated remarkable academic and professional success along with a record of continued support and connection to their member program. Vicky’s commitment to urban squash continues to impress us, as she recently filled the Academic Coordinator position at SquashBusters Lawrence.

This summer we saw a lot of enthusiastic and determined players. We commend our students and their coaches for all their hard work and commitment over the year to get them ready for these summer tournaments.