December was a busy month of competition, as urban squash students across the country were gearing up for this weekend’s Urban Team Nationals, which is being jointly hosted in Boston by Northeastern, Harvard, and SquashBusters. On December 5th, 60 urban squash players from six Midwestern programs traveled to Gambier, OH, for the Kenyon Invitational, while 80 students descended on Hartford, CT for the Trinity Invitational. CitySquash swept the Hartford event and Racquet Up and Urban Squash Cleveland earned titles at Kenyon. A week later, on December 13th, 80 players gathered at CitySquash in the Bronx for the Fordham Invitational, another team tournament. StreetSquash’s girls and Squash Haven’s boys won their divisions in the inaugural high school competition.

Elroy Leong, the Trinity Invitational tournament director and Capitol Squash’ Squash Director, commented that “it’s nice to have other urban squash programs visit Trinity.” Myra Sack, Program Director at SquashBusters Boston, recognized the value of bringing students to Trinity’s legendary squash program. “Walking in, the feeling is palpable that this is a revered program and its just so special for our kids to be exposed to this national level of squash,” Myra remarked. 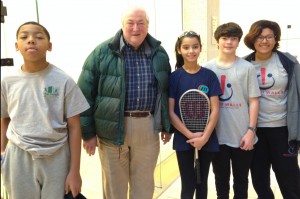 The Kenyon Invitational, a new co-ed team tournament for our Midwest programs, was held at Kenyon College and run by Cincinnati Squash Academy Executive Director Austin Schiff. “The tournament provided good competition, a broad spectrum of skill levels, a familiar sense of camaraderie and sportsmanship, and a lot of match play all tightly-wound in a compact weekend time frame,” said Schiff. Kenyon Coach John Knepper and Denison Coach Walt Thiemann brought their men’s teams to play an exhibition match for the urban squash players, after which the urban squash teams jumped on court with the college students to play king of the court.

The Kenyon Invitational U13 division was won by Racquet Up Detroit, and MetroSquash was the formidable runner up. With two teams in the U15 division, the players battled it out in a special 25-match round robin draw, in which Urban Squash Cleveland bested Beyond Walls. “I won two matches and I’m doing better in squash, getting better at my volleys and backhand at Kenyon,” said Shamarr Rollins, a 7th grader from Urban Squash Cleveland. 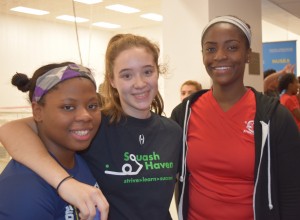 December 13th provided another day of heated competition at the Fordham Invitational, this time hosted and run by CitySquash’s Squash Director and Fordham coach Bryan Patterson and CitySquash Squash Coach Chris Fernandez. Even the Baltimore and Philadelphia programs, SquashWise and SquashSmarts, made the trip up to the Bronx. “Our players really enjoyed themselves, not only while they were on court competing but also when they were hanging out with old and new friends from other NUSEA programs,” said SquashWise Squash Director Zach Bradley. “I think that team tournaments like this create a great environment in which players have to work together, support and take care of each other, and make sure everyone is playing a role.”

The tournament ended with StreetSquash winning the girls division and with CitySquash as the finalists. Squash Haven won the boys division and CitySquash was the finalist. The weekend challenged the players, but as Tanaysia Johnson from SquashWise said of the event, “it doesn’t matter how hard the match against your opponent is, you should never give up until it’s over.”

The three tournaments gave a preview of the competition to come at Urban Team Nationals. Many students left eager for their potential rematches in January.