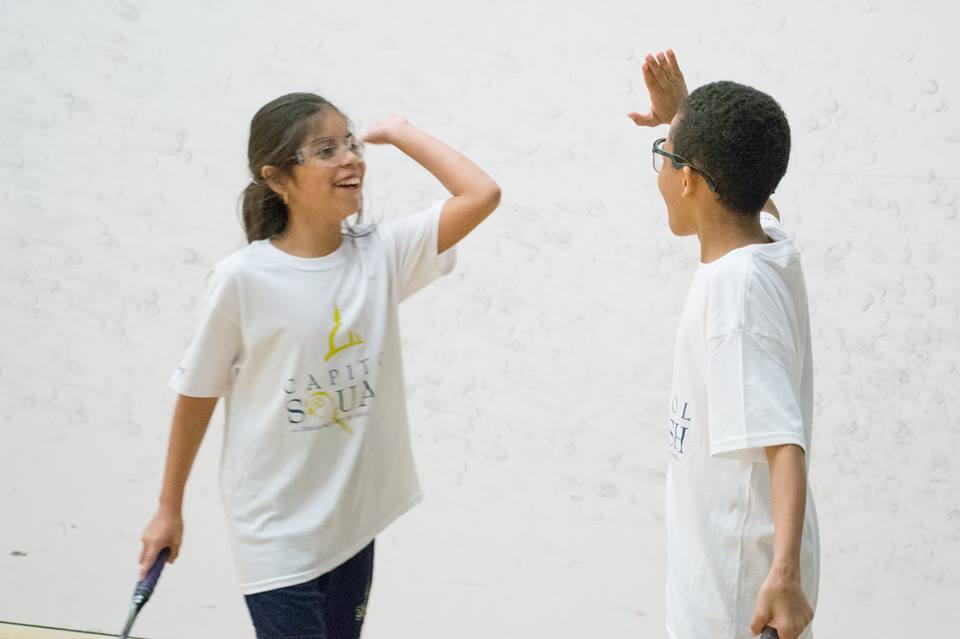 This September, two new programs started practices for their group of eager participants in Hartford, CT and Cincinnati, OH.

Led by Executive Director Meg Taylor, Capitol Squash operates out of Trinity College, which boasts one of the country’s premier squash program. Capitol Squash partners with M.D. Fox, a Hartford public school serving pre-K to 8th grade that is located less than a mile from Trinity’s squash facility. Juan Flores, a 2012 Trinity graduate and former Bantam squash player, returned to his alma mater to head all squash programming for the organization. “After over two months of tryouts and over 80 students trying out, twenty eight students have been selected for our program,” Meg reported. “They have fallen in love with the sport and we cannot wait to see them progress both on the squash court and in the classroom.”

Cincinnati Squash Academy (CSA), staffed by Executive Director Austin Schiff, Squash Director Vir Seth, and Academic Director Rachael Parker, is based at the historic Emanuel Community Center on Washington Park in Cincinnati. CSA has teamed up with St. Joseph School and Hays Porter Elementary School to serve up to forty 3rd – 7th grade students this year. “The launch of the Cincinnati Squash Academy has been very exciting,” Austin explained. “There is no better feeling than watching students who previously had no idea about squash become so passionate about it in such a short time!”

Pending a successful application for NUSEA membership, Capitol Squash and Cincinnati Squash Academy will be the 16th and 17th member programs respectively. Stay tuned for updates on new member program launches in Pittsburgh and other cities nationwide.

Urban Squash’s 20th Anniversary was an unforgettable celebration that united students, alumni, staff, and supporters to commemorate two decades of urban squash. Over the weekend of January 16-18, more than 1,250 members of the urban squash family flocked to New York City, coming from across the country as well as Canada, Colombia, England, Ireland, India and Zimbabwe. All of the 20 urban squash programs that operate under the NUSEA umbrella were represented, and the event raised a record $2 million for NUSEA.

Click here for photos and videos from the weekend!

The college squash season is underway and we are proud that 52 alumni are playing for their respective colleges and universities – from UC Berkeley and Denison to Columbia and George Washington.

Over the weekend of November 14 -16, many of these alumni competed against one another at Trinity College. Trinity hosted teams from Connecticut College, Bates, Bowdoin, Franklin and Marshall and Middlebury in which fifteen urban squash alumni participated. While the competition was fierce, the matches acted as a nice reunion for our NUSEA alumni. “It was special to see so many urban squash alumni playing for their colleges, both competing against each other and supporting each other,” noted NUSEA Executive Director Tim Wyant.

One of the weekend competitors, Mawa Ballo, StreetSquash ’14 and Connecticut College ’18, was recently named Harrow Sports College Squash Player of the Week. She received the honor after earning victories against Tufts, Boston University, and Wellesley.

We wish all of our urban squash alumni the best of luck this season.

Squash Haven students take a quick break from action at Northeast Regionals in New Haven
On Saturday, October 11, student-athletes descended on Yale University for a great day of Under 13 and Under 15 competition at Northeast Regional Championships. The tournament had over 150 student competitors, 51 matches, and 30 teams participating. Students from Squash Haven, CitySquash, StreetSquash Harlem, StreetSquash Newark, SquashBusters Boston, and SquashBusters Lawrence took part in this tune up before Urban Teams in January.

“We are uniquely set up at Yale,” remarked Squash Haven Squash Director John Dewitt, who ran the one-day tournament. “With our 15 courts and central location, Squash Haven is able to host big events like this where we can get many students from different cities together. Playing matches enhances the kids’ enjoyment of squash and teaches them life lessons about winning, losing, sportsmanship, and effort.”

A special thanks to Squash Haven and Yale University for their hard work in making this a fun and valuable experience for all.

Twenty middle and high school students from urban squash programs around the country traveled to Philadelphia over Columbus Day Weekend to participate in the 2014 U.S. Open Squad. Led by Renato Paiva and Yuri Franca from San Diego’s Access Youth Academy, the training sessions focused on technique and strategy. The squad included coaching by urban squash alumni and current college students Terence Rose (StreetSquash ’12), Jazmin Matos (StreetSquash ’12), Cris Frias (CitySquash ’12), Andreina Benedith (CitySquash ’14), and Liz Gatling (StreetSquash ’10). “It was the perfect venue for the kids to raise their squash level,” explained Yuri. “The students were given a chance to be a part of intensive squash training and improve their vision of the game.”

Coinciding with the U.S. Open, the professional squash tournament held at Drexel University, the students also watched exciting matches and met world #1 Nicol David and other top players in the world.

A big thank you to the entire SquashSmarts program for hosting this successful event.