Over the weekend of November 6-8, a team of 10 urban squash high school girls competed alongside 250 women at this year’s Howe Cup at Harvard University. Led by former Dartmouth coach Chris Brownell and NUSEA’s Squash Director Julie Monrad, the girls traveled from their home programs in Santa Barbara, Detroit, Baltimore, Harlem, Chicago, New Haven, and the Bronx. The group split into two teams of five players to compete in the B and C divisions. In tandem, StreetSquash paired 17 girls from their program with the New York teams, and SquashBusters entered its own team of six girls. Playing in the Howe Cup provided invaluable lessons for the girls’ games and opportunities to begin developing friendships with women across the country. 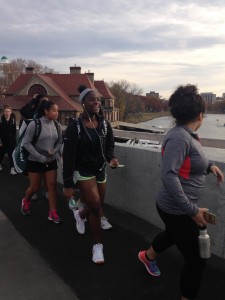 NUSEA’s selection process for the team probed into each candidate’s work ethic and experience as a female student-athlete. The application essay asked applicants “what is it to run like a girl and play squash like a girl?.” The girls’ in-depth, thoughtful reflections on being a female-athlete proved they were the perfect group to play at the Howe Cup, the United States’ largest squash event for women. Squash Haven Denise Bonilla wrote, “to play squash like a girl is to keep running forward, because no matter how far we think we’ve come, we can always lunge a little farther.”

Harvard’s Adams House Masters Judith and Sean Palfrey kindly hosted the NUSEA team for the weekend. Each morning the girls woke up before 7AM and walked across the Charles River to the Harvard Murr Center. The girls had an extensive team warm up of running, squats, stretching, and rolling each morning to prepare them for their long days of matches. 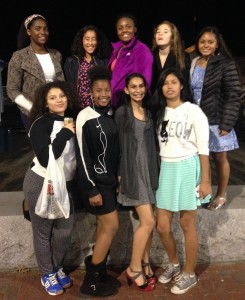 Saturday evening, they attended the Howe Cup dinner at the New England Aquarium, which provided moments of inspiration from the weekend’s participants. Our students were particularly touched by the speeches given in honor of and by Sportsmanship Award Recipient Mona Butterfield and Achievement Award Recipient AJ Copeland. Squash Haven’s Pratiksha Mishra had lost to AJ Copeland that afternoon, and after hearing Copeland’s history of service to the United States as a military surgeon, remarked, “After hearing everything she’d done I was just like ‘wow!’”

Another match of the weekend took place between SquashWise’s Tanayshia Johnson and Capital Girls’ Penny Glover, once the Canadian National Champion and still fiercely competing at age 70. Johnson played beautifully, yet it was hard to compete with Glover’s experience and understanding of the game. To have Johnson on court with one of the sport’s most inspiring figures meant more than any win. “The squash is secondary,” said US Squash’s Kim Clearkin. “To me, these incredible women coming together, that’s the point of the tournament.”

Beyond high level squash, the weekend provided leadership opportunities for our urban squash young women. StreetSquash Joetta Francis attended the Women’s Squash Committee meeting to discuss future tournaments, initiatives, and plans for next year’s Howe Cup. Engaging with the female professionals, once opponents on court, left an impression on our team members. With signed Howe Cup shirts and traded gear in hand, the girls reflected on bonds formed and moments of sportsmanship. “Towards the end of that weekend, I realized that this wasn’t an experience that was about winning,” said Santa Barbara School of Squash Zaira Paredes. “It was about making friends and having the time of our lives. I have to admit it was the most fun I’ve had in a very, very long time.” 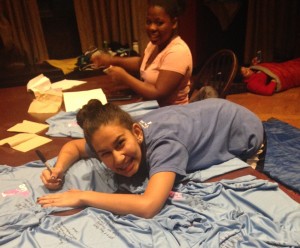 NUSEA is so thankful for the many individuals who made this weekend an unforgettable one for our students, especially Chris Brownell, who coached them throughout the weekend. “This weekend was an honor for me to coach two NUSEA teams. While they were new to each other, they bonded and worked hard, soaking up the fun camaraderie at the Howe Cup. Everyone left feeling positive about their own games with plenty to work on for future competitions. I can’t wait to run into our players on the road!”