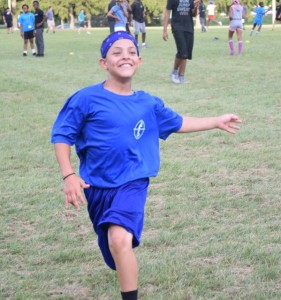 Over the weekend of July 22-24, 10 programs from the Midwest and Northeast came together to compete in the fourth annual Urban Midwest Championships at Kenyon College in Gambier, Ohio. The 132 students participating in the event hailed from Chicago, Cleveland, Cincinnati, Boston, New Haven, Detroit, Denver, Philadelphia, Pittsburgh, and Baltimore. Racquet Up Detroit stood out in the competition this year, winning four titles. “At this tournament, students connect to each other in a special way,” said Racquet Up Detroit Executive Director Derek Aguirre, who has attended all four years. “It’s also an opportunity to demonstrate the growth and enthusiasm for squash in the Midwest.”

Attending students got the full college experience by sleeping in the Kenyon dormitories and eating in Peirce Dining Hall. “The Urban Squash Cleveland youth love Kenyon and the tournament here,” said Urban Squash Cleveland Academic Director Fiona Hensley. “They talk about the food all year and one of our boys kept calling it Kings College because he couldn’t get over how royal it feels. It’s a storied tournament.” MetroSquash student Blessing Hunter, a rising 7th grader, had a different take on the experience of living at Kenyon for the weekend. “The campus is fun, but those hills are tough!” After three matches, walking uphill from the courts to the dining hall for dinner can feel like another match. 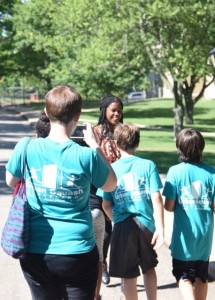 To tie in NUSEA’s focus on education and enrichment, students were given a 36-hour academic challenge on Friday morning. As a team, programs had to answer questions on math and geography, as well as solve riddles. Impact 360 came away victorious and were rewarded with nerf balls and frisbees to commemorate the time they spent playing outside in Kenyon’s fields. In keeping with the event’s tradition, all students and staff gathered at McBride field on Saturday evening to play a tournament-wide game of Capture the Flag.

For many students, the tournament acts as a smaller version of NUSEA’s large competitions such as Urban Individual Nationals. It gives an opportunity for students to experience the competitive environment and enjoy the summer weather on a college campus. “I didn’t do that well in the tournament,” said Markell Swift from SquashWise. “But I’m ready to come back and do better next year.”