SEA has 19 member programs in the United States, the highest concentration of which are based in the Northeast. The movement was started in Boston, and has grown to include Rhode Island, Connecticut, New York, New Jersey, Pennsylvania, and Maryland. In the last decade, urban squash programs have sprawled westward, with two organizations launching in Ohio and one in Pittsburgh, joining the other Midwest programs in Detroit, Chicago, and Minnesota’s Twin Cities. West of the Mississippi SEA has four more member programs; one in Denver, and three in California, stretching from Oakland to Santa Barbara to San Diego.

Enter Charleston, South Carolina. Founded in 2009, Kids on Point is the only SEA program in the southeast region of the United States. The closest member program to Charleston is Baltimore’s SquashWise, a 10 hour drive north on I-95. US Squash lists only seven courts in all of Charleston, reflecting the size of the squash community there. Yet, despite what might seem like major obstacles for success and engagement, Kids on Point has put down roots and begun to thrive.

Lauren Herterich is the program’s executive director. She came to the organization in 2014 in a part-time capacity as the grant writer, and transitioned to her current role within six months. Herterich is not phased by her program being based outside of the traditional “squash belt.” Herterich is pleased with the progress that the program has made and how it has taken root in Charleston. “We are running one of the best afterschool and summer programs in the city,” Herterich shares confidently. “Lots of other organizations are looking to us to learn about how they can be successful too.”

A major reason for Kids on Point’s success has been its relationship with the College of Charleston, which provides access to facilities and mentors for the program. Through the college’s work study and AmeriCorps Vista programs, undergraduates at the college are matched with Kids on Point. While they are paid through their respective programs, they come to the organization free of charge. “We have 65 undergraduate mentors that volunteer weekly in the classrooms on the courts,” Herterich shares. 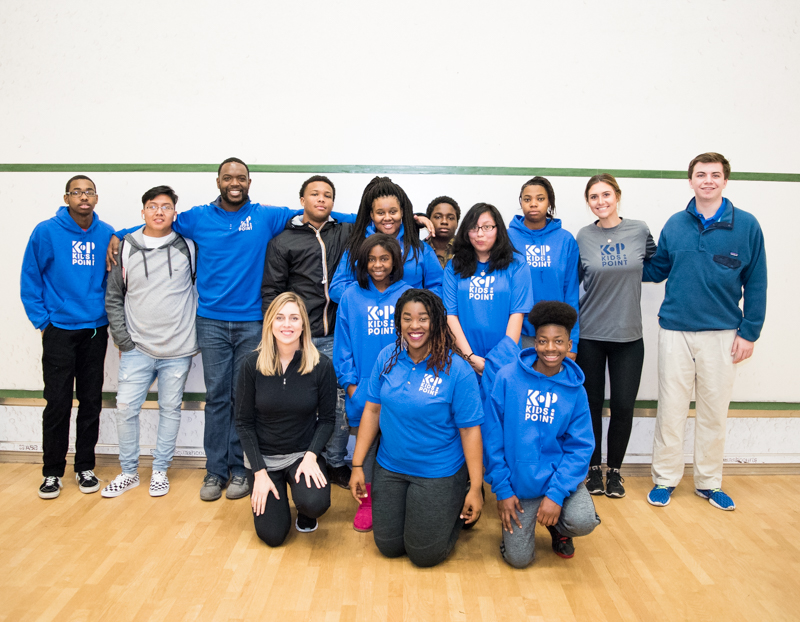 The partnership with the College of Charleston was established early in the organization’s history. Recognizing the value in having students on campus regularly, in addition to identifying the college’s converted racquetball courts as a critical resource to the program, Kids on Point’s board chair Todd Abedon arranged a meeting with Frances Welch, the Dean of Education. Welch was unfamiliar with squash but was a huge proponent of education, and saw the need for a program like Kids on Point. She helped to create an agreement for the program to use the courts and a classroom, and connected the organization to others on campus. Today, Kids on Point works with 13 different departments at the College of Charleston, all of which support the program in some way.

Kids on Point serves 48 students in 5th-12th grades, each of whom attend the program four days a week, in addition to weekend programming. This year the oldest cohort will graduate from high school, with all five students going on to college. Jamita Brown, the program’s Academic Success Coordinator, notes that this is a major step for the organization. “I think this year will be the first time that it makes sense to all of our scholars about why they stay in the program for so long,” Brown reflects. “Once our students graduate and go on to college, all of our scholars will understand why we want them to stay in the program and keep coming back. We’ve been saying that we send them to college, but this year we’re really going to do it.”

Kathy Parks was the first non-squash-playing board member at Kids on Point, and has been involved with the program since 2015. Parks notes the challenges that the organization has faced with being located far from other SEA programs and a vibrant squash community, but highlights the ways in which the program has found success. Parks shares that it has been the process of looking to other sites, learning about the model, and then making the model fit the Charleston environment that has helped to propel the organization forwards. “We look at what other programs are doing, we identify what works, and then we adopt it and adapt it to the kids we’re working with,” Parks shares. Brown agrees with Park’s assessment, “We really try to fit Charleston, we really fit where we are and what our scholars need here.”

One way that Kids on Point has adapted the urban squash model has been to bring in additional programming to supplement the academics, community service and squash components of the program. All Kids on Point participants participate in clubs that run for six-week sessions, which may include cooking, baking, running, yoga, science, STEM, journalism, archery, and more. These enrichment activities give the students a chance to supplement their learning in school, and help to keep the participants engaged over the long term. “The scholars need to be exposed to different things,” Brown, who heads up the club initiative explains. “It helps to shake up programming and have something in addition to squash and academics. The clubs also have a real life component; we don’t just prepare them to earn all ‘As’ in school, we also prepare them to become citizens.” 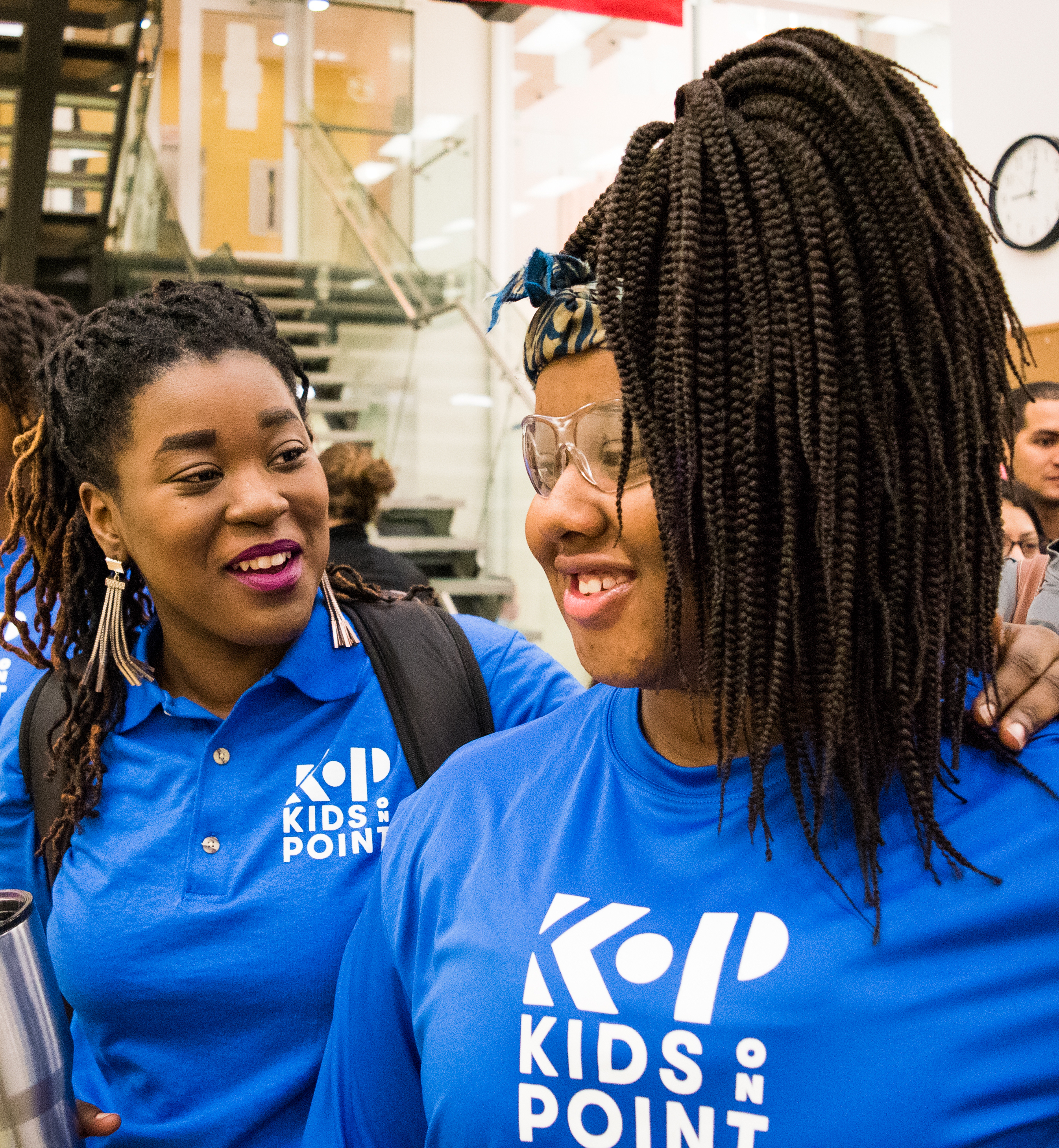 Carlton Pugh, the organization’s Athletic Coordinator, has also learned to be creative with his sessions. Pugh functions as the squash coach for the program despite having come from a background of football and athletic training, with no squash experience prior to coming to Kids on Point. Learning about the sport using YouTube and reading about squash online, Pugh has built a program for the students that incorporates individual reflection and the building of self-confidence. Rather than dwelling on what they might be missing in terms of a large squash presence in the community, Pugh helps the students focus on their assets. “Because we don’t have what everyone else has, we have to build on ourselves and make ourselves better,” Pugh reflects. Furthermore, he notes that his approach is working. “I see our students thriving in squash and getting more interested as the months go by,” Pugh shares. “I love helping to build up their confidence level and letting them know that they can be successful. We’re trying to get them to see how big squash can be for them.”

In addition to the program’s relationship with the College of Charleston, two additional structural elements have inarguably helped the program to succeed. The first is parent engagement. “Every six weeks we have a parent meeting and we expect the parents to come, to advocate for us in the community, and make sure that their scholars are bought-in to the program,” Brown explains. Like the students, the parents show up. The program ties the meetings to opportunities to provide workshops related to financial literacy, eating healthy on a budget, student loans, credit scores, and more, helping to impact the entire family unit, and not just the students attending the program.

The second structural factor that has impacted Kids on Point in a significant way has been its ability to collaborate with other organizations in Charleston. ”Lauren’s best asset is collaborating with other small nonprofits; she reaches out to everybody,” Parks explains. To Herterich, it’s a no-brainer. “Leveraging partnerships is how programs will be successful in areas that don’t have a solid squash community,” Herterich shares. In addition to the relationships that she has grown with the College of Charleston and the Lowcountry Food Bank, which provides students with daily meals at programming, Herterich has been the driver behind an unprecedented summer initiative, Kids on Point Summer Success, launching this June.  “We are leading the initiative and have coordinated partnerships with 20 other nonprofit organizations throughout the community,” Herterich explains. “We will serve 140 students, K-12th grade. The big picture goal is to serve these students in a year-round capacity with one of the participating partners, and ultimately transition them to our program in the 5th grade.”

So what’s next for Kids on Point? The program is in the midst of a $500,000 construction project to renovate and convert the courts at the College of Charleston, which will result in five squash courts for the organization. After that, the program plans to continue growing its enrollment each year, until it reaches its maximum capacity of 150 students. Along with an increase in enrollment, the budget will grow from its current $300,000 level to over $500,000, and beyond. Herterich hopes to eventually expand the organization into other areas of Charleston, and to continue forging partnerships with other local organizations. “It won’t happen overnight,” Herterich reflects, “but I believe that’s what’s next.”