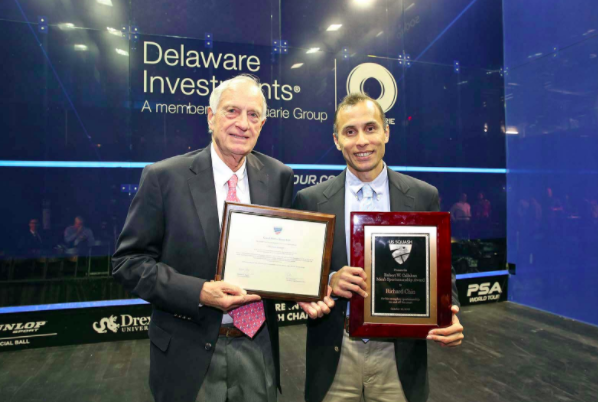 Hensel, one of the founding members of Minnesota’s Beyond Walls, has been involved with every level of the Midwestern urban squash program. He coaches students as much as four times a week and is adored by them. “Our students look to Rob as a father figure,” said Jazmin Danielson, the executive director of Beyond Walls. He attends tournaments and mentors staff members. “Few board members of urban squash programs have rolled up their sleeves with as much enthusiasm and volunteered as much time to support on the ground programming,” said Tim Wyant, executive director of NUSEA. “Rob has done so much for the students and staff of Beyond Walls. He sets the bar high and it is inspiring to see.”

The announcement that Geoff Mitchell was named USOC coach of the year was made in October, just prior to the US Open Championships in Philadelphia. As the longtime head of Mitchell Squash and head squash pro at the Chatham Club in Chatham, New Jersey, Mitchell has contributed to junior squash in countless ways. The Canada native has helped pave the way for the implementation of the US Squash regional squad structure and developed countless juniors into national level players. He is a strong squash player himself, having been ranked #1 in the country for his age group, and has been instrumental in developing StreetSquash Newark into an outstanding urban squash program. “StreetSquash Newark is so much beyond the squash game,” Mitchell says. “I learn more from our students — their daily hardships that they overcome — than they have learned from me. I feel humbled every day to be a part of this program.”

Known as a consummate sportsman, Chin was inducted into the Cornell Athletics Hall of Fame and served on the board of US Squash for eight years. With Chin’s coaching efforts, Team USA’s women finished seventh at the World Team Championships in New Zealand in 2010, the best result the team has had in 25 years. Chin was also instrumental in securing the Harvard Club of New York City as a facility partner of StreetSquash Harlem when the organization launched in in 1999. Chin has been the head pro at the Harvard Club for almost two decades and was awarded the Callahan Sportsmanship Award in Philadelphia at the US Open Championships. “Considering all my fellow teaching professional peers and friends who play, all whom are equally deserving of this award, I am honored to receive this sportsmanship award in honor of Bob, who gave so much to the game, to me and generations of other players,” said Chin.

We congratulate Messrs. Chin, Mitchell and Hensel for their well-deserved awards!