SEA’s Oakland-based member program SquashDrive welcomed its new leader Patrick Williams on November 16th, marking a milestone for both the 10-year old organization and the SEA network. Patrick, who joined SquashBusters in Boston as a sixth grader, is the first SEA alumnus to serve as an executive director of a member program. 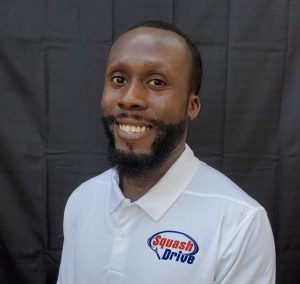 Williams comes to SquashDrive with over a decade of experience in youth development, most recently serving as Site Director at the Watts/Willowbrook Boys & Girls Club. Previously, he spent four years as the Youth Program Director at the YMCA in South Los Angeles. Prior to moving to the west coast, he coached at SquashBusters, Beaver Country Day School, the University Club of Boston, and the Union Boat Club, taught elementary school in Maine, and worked as an after-school coordinator at the YWCA. Williams completed his B.A. at Bates College, where he was senior class president, co-captained the varsity squash team, received a NESCAC  sportsmanship award, and founded Lewiston Squash, a program for Sudanese and Somali refugees. He has a Masters in Coaching & Athletic Administration from Concordia University Irvine.

“Patrick is the embodiment of urban squash success,” says Greg Zaff, SquashBusters’ Founder and CEO. “He is the reason why I started this program and why I remain so committed to it 25 years later. Patrick is a person of incredible character and competence. It is a proud milestone moment for all of our programs that he is the first alumnus to become a director. We all want to see him become wonderfully successful.”

“The entire SEA community congratulates Patrick,” says Tim Wyant, SEA’s Executive Director. “He is a role model to the thousands of students across our network and an example of the virtuous cycle that our member programs continually strive for — to pay it forward and give back to one’s community.”

Williams succeeds SquashDrive Founder Lauren Patrizio Xaba, who has led the program for the past 10 years. Under Xaba’s leadership, the organization has grown to serve more than 80 students and has sent two classes of high school graduates to college. “Lauren created SquashDrive from scratch and, for more than a decade, has brought the Bay Area community together to make it the extraordinary organization that it is today — the product of her relentless determination, infectious enthusiasm, and deep commitment to service,” says Wyant.

We recently spoke with Williams about his new role and this milestone achievement. 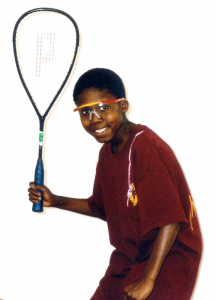 What most excites you about leading SquashDrive?
Being the first Black man and alumnus to run an SEA program and having an opportunity to be able to give and offer youth the same opportunities I was offered. When I was at SquashBusters, I got to meet kids of different races, travel to different states, and I got the opportunity to go to Bates College, which I never would have if it weren’t for SquashBusters. To be able to offer that to the kids in Oakland, that’s everything. It’s full circle.

The second piece is that SquashDrive is in an exciting spot right now. There’s a need for the program to grow and to get its own facility. I can still remember the first day SquashBusters’ facility opened. Showing up to practice and getting our own lockers…it was so exciting. SquashDrive’s first two classes are in college right now and they don’t have a place to go back to yet. To be able to give a home to that program and the kids, that’s huge.

As someone who has been through an SEA program, how does it feel to now be the person in charge?
It’s still challenging to come up with the words. It’s an honor. It’s something I’ve wanted to do since I was a teenager. Running SquashBusters was always the big goal and building the Lewiston squash program at Bates was sort of a test run for me. Putting your blood, sweat, and tears into running your own program, that’s really exciting. At the end of the day, it’s a phenomenal feeling.

Is SquashBusters still a part of your life?
Oh, yeah. Every college break, when I would go home to my actual home, I would also go home to SquashBusters. There were three teams before me, but we were the first to have the facility and the first to have a high school program.  We were 28 students, 14 from Boston and 14 from Cambridge, when I started. I remember the program used to run just from February to June and sort of left us wanting more. My class was the first to go year-round. I still volunteer for a day or two whenever I’m back in Boston. 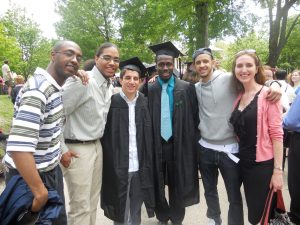 Did you always aspire to play college squash? What was your experience like at Bates?
When I was a sophomore in high school, there were some squash players above us that we looked up to. They were the best guys in their class, but none had gone on to play college squash. I remember Greg (Zaff, Founder and CEO of SquashBusters) called it out and he asked us, “Do you want to play college squash?” I thought, “I do want to. That would be everything.” So, I sat down with my squash coach and the program director at the time to talk about it, and we realized I needed to make a change.  The next year,  I got all As. I visited Bates my senior year and that’s the only school I applied to. I got in and it was the best four years of my life. 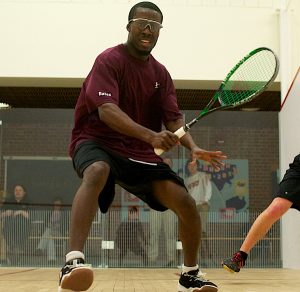 What are your hopes for SquashDrive and the SEA network in the future?
I expect to see a lot more alumni in program director and executive director roles, or even having started their own program.

It’s not to say that those who are currently running the programs aren’t great. All of my coaches and mentors at SquashBusters did a phenomenal job. (Look at where I’ve made it!) But to have your alumni come back and spearhead something, now that’s exciting. Who’s going to relate better to the kids being served than those kids themselves?