This year, urban squash will welcome over 400 new students to the family. As part of the annual recruitment process, over 1,000 students from 60 different schools will undergo tryouts, lasting an average of eight weeks. NUSEA’s international affiliates such as Squash Urbano Colombia and Urban Squash Toronto also increased enrollment this year. Tryouts last between several weeks and four months, and each member program sets its own standards for selection, taking into consideration factors such as dedication to academics, athletic interest and ability, commitment to the program, and attitude. Between September and December, tryouts will expose students across the nation to the sport of squash and the urban squash community. 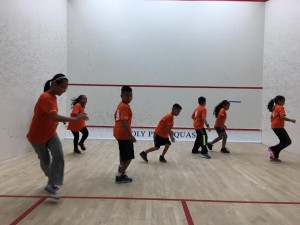 Recruitment begins at each program’s partner elementary and middle schools. The introduction to urban squash often involves an amusing “hook” to the sport. The staff at Pittsburgh’s Steel City Squash presents themselves to a prospective 6th grade class by setting up tables in their cafeteria during lunch hour and holding a formal information session during last period. In an interactive presentation, Executive Director Brad Young asks the students if anyone knows what squash is, only to have a Steel City student answer that he or she does, then come up to the podium to present on the sport.

Squash Haven does “gym visits” at its partner schools. During the 5th grade class’ gym period, Squash Haven coaches and directors provide squash balls and racquets for an interactive presentation. According to Squash Haven’s Squash Director, Owen Butler, exposing students to “this cool new sport” is largely beneficial to gaining student interest. After hitting squash balls, students are invited to the Squash Haven Open House event where they can sign up for official tryouts.

Parent cooperation is the next essential step in the recruitment process. For long-established programs, such as CitySquash, parents’ interest comes more easily. Neighborhood students and parents are already familiar with the program and often anticipate a child’s chance to try out in third grade. Parents become so involved that they are gently asked to not attend tryouts. “We ask parents not to come to tryouts, because they may make students nervous by watching,” explained CitySquash’s Volunteer Coordinator, Rochell Hudson. 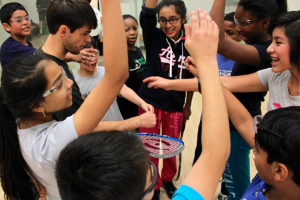 For newer programs, such as Impact360 in Denver, gaining parental trust and interest can initially pose a challenge. When parents do show hesitation, staff members go the extra mile to generate trust. “Sometimes the parent doesn’t know who we are, and they are cautious,” explained Impact 360’s Squash Director Otto Schlosser. “However, we’ll talk to the interested students again and they will set up an appointment to talk to their parents in person.” In-person meetings, sometimes even home visits, are a regular part of recruitment for staff members. These meetings go a long way in communicating the multifaceted benefits of urban squash.

Understanding a program’s academic benefits often helps. “Some parents say ‘we don’t want them to be distracted from their school work,’ but once you mention it’s an academic program they feel good about it,” says Steel City’s Rosado. Rosado also stresses to parents other benefits urban squash programs can provide, such as travel, college access programming, and potential scholarships. “The second we start talking about college, the parents start nodding their heads like ‘yup yup I want my kid there,’” remarked Squash Haven’s Butler. 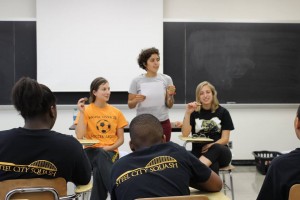 The student tryout sessions involve a series of opportunities for staff members to observe a student’s commitment level, athleticism, academic interest, and individuality. To test commitment, most programs integrate players into regular practices for a “trial period,” during which they have to fully adhere to the program rules and requirements. At CitySquash, “we have them run court sprints to see how fit they are and how athletic they are,” said Hudson. At Impact360, tryouts include one-on-one interviews and listening games. “The listening games are not squash-related,” Schlosser told us. “They are just to see how students engage and respond to us.” These tidbits of information help programs differentiate between students who are truly committed to each moment in a day’s session.

While recruitment demands a lot of time and energy, it is a rewarding annual tradition that strengthens relations between the staff members and the community. “The last two years, I’ve been able to coordinate the recruitment process, and it’s been a lot of fun for me,” Butler reported. “I’d hand out Squash Haven flyers and every now and then get these funny calls from kids looking to try out. It’s cool to see the courage these kids have to try something new.”

As tryouts wrap up, new students will “make the team” and commit to a rewarding future in urban squash. Each new generation of urban squash student-athletes breathes new life into a program, its classrooms, and its courts. We can’t wait to see how these new urban squashers develop in the years to come.