The Speaker Series aims to connect SEA’s network of students, alumni, and staff with leaders and icons from the squash world and beyond, providing insight and inspiration. Throughout the series, participants will have the opportunity to hear firsthand from educators, world ranked squash players and coaches, SEA alumni, and more. 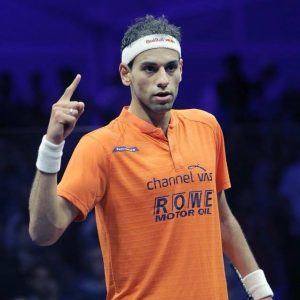 Watch Mohamed’s Q&A
June 16, 2020
Mohamed is an Egyptian professional squash player, currently ranked No. 1 in the world. Born in Alexandria, Mohamed joined the PSA in 2006 at the age of 15 and became the first player in history to win a maiden PSA World Tour title at a five star event. He won the World Junior Championship in 2008 and 2009, becoming the second man ever to do so. Mohamed claimed his first World Series win in the Qatar Classic in 2013 and won five events including World Series tournaments at the Hong Kong and US Opens in 2014. He reached the World No. 1 ranking in November of 2014, which he has held for a total of 45 months throughout his career. He won the British Open, Tournament of Champions, British Grand Prix and Qatar Classic titles in 2015. In the year that followed, Mohamed went on to win six successive World Series titles and was named PSA Men’s Player of the Year in 2016. In December 2017 he landed his first World Open title by defeating his younger brother Marwan El Shorbagy and he ended the season ranked world No. 2. Mohamed reached the World No. 1 ranking again in March of 2018 and has currently held the top ranking since February of 2020. 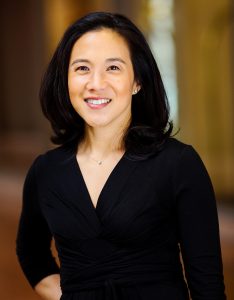 Watch Angela’s Q&A
June 5, 2020
Angela is the founder and CEO of Character Lab, a nonprofit whose mission is to advance scientific insights that help children thrive. She is also the Christopher H. Browne Distinguished Professor of Psychology at the University of Pennsylvania, faculty co-director of the Penn-Wharton Behavior Change for Good Initiative, and faculty co-director of Wharton People Analytics. A 2013 MacArthur Fellow, Angela has advised the White House, the World Bank, NBA and NFL teams, and Fortune 500 CEOs. Prior to her career in research, Angela founded a summer school for low-income children, worked as a McKinsey management consultant, and was a math and science teacher at public schools in New York City, San Francisco, and Philadelphia.

Angela completed her degree in Advanced Studies Neurobiology at Harvard and completed an MSc with Distinction in Neuroscience from Oxford University with the support of a Marshall Scholarship. She completed her PhD in Psychology as a National Science Foundation Graduate Fellow at the University of Pennsylvania. Angela has received numerous awards for her contributions to K-12 education, including a Beyond Z Award from the KIPP Foundation. Angela’s TED talk is among the most-viewed of all time. Her book Grit: The Power of Passion and Perseverance is a #1 New York Times best seller.

Watch Sarah-Jane’s Q&A
June 2, 2020
Sarah-Jane is a professional squash player who represents England and is currently ranked No. 6 in the world. Born in Birmingham, England, Sarah-Jane’s junior career included victories in the European Under 19 Individual Championships in Cologne and the British Under 19 Championships, both in 2009. She made her Tour breakthrough in 2011, capturing her first title at the Manor Open. In 2012 and 2013 she won two more British National Championships in the Under 23 category. Sarah-Jane was part of England’s winning team at the 2013 European Squash Championships and reached the quarter finals in the 2013 World Games. She broke into the top 20 just prior to her 23rd birthday. Sarah-Jane won the 2017 Oracle NetSuite Open and made her Team England debut at the Gold Coast 2018 Commonwealth Games where she won a silver medal in the women’s singles. She is a graduate of the University of Warwick and currently serves as the PSA’s Women’s President. 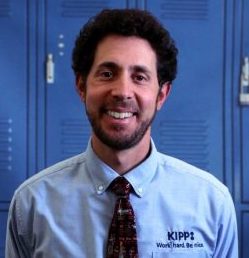 Watch Dave’s Q&A
May 28, 2020
Dave is the co-founder of KIPP,  a network of free open-enrollment college-preparatory schools in low-income communities throughout the United States. From teacher, to principal, to Executive Director, Dave has taken on many roles since co-founding KIPP in 1994. Dave currently works with KIPP leaders on instructional innovation, leadership development, and teacher training. Throughout his career, Dave has been awarded: The Robin Hood Foundation’s John F. Kennedy, Jr. Hero Award, an Ashoka Fellowship, the National Jefferson Award for Distinguished Public Service by a Private Citizen; the Charles Bronfman Prize, a national service award from Spelman College, Honorary degrees from Duke and Yale University; and the Presidential Citizen’s Medal, our nation’s second highest presidential award for a private citizen. Outside of KIPP, Dave co-founded three organizations: Relay Graduate School of Education, the Character Lab, and Zearn. Dave lives in New York City. 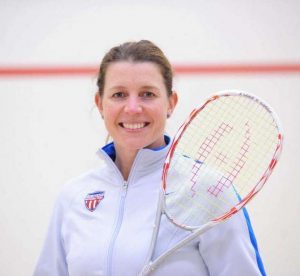 Watch Natalie’s Q&A
May 21, 2020
Natalie is a retired professional squash player. She was born in Manchester, England, raised in South Africa, and currently resides in Greenwich, CT. Natalie first made her mark on the international stage after reaching the quarter finals of the World Junior Championships in 1993 and 1995. She joined the PSA Tour in 1996 and has played for the national teams of South Africa and the United States. Natalie became the highest-ranked South African of all time in 1999 when she reached seventh in the world rankings. She went on to reach the World No. 1 ranking in 2003. Natalie served as the President of WISPA (Women’s International Squash Players Association) from 2003-2011, was runner-up at the World Open in 2002 and at the British Open in 2004, and won her third World Masters title in 2018. Natalie is currently the Squash Director at Westchester Country Club and is a Board Member of Squash Haven. 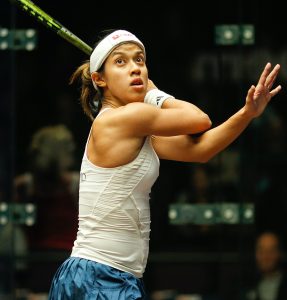 Watch Nicol’s Q&A
May 8, 2020
Nicol is a retired professional squash player. Born in Penang, Malaysia, Nicol went pro in 2000 at the age of 17 and went on to win eight World Open crowns, 81 pro titles, five British Open titles, two Commonwealth Games gold medals, five Asian Games gold medals and three World Games gold medals. Nicol was the first Asian woman ever to reach World No.1 in 2006, a ranking she held for an unprecedented 112 months. Off the court, Nicol became the youngest person ever to be awarded the title ‘Dato’’ from the Penang State Government and in 2008 was honored the highest order with the Order of Merit from the King of Malaysia. Also, she was honoured a title ‘Datuk’ from the Federal Government was conferred to David by HRH The King in 2017. Since retiring from the pro tour in 2019, she continues to be an inspiration, serving as an ambassador for the Laureus Foundation and UNDP National Goodwill. 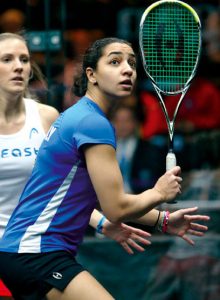 Watch Raneem’s Q&A
April 30, 2020
Raneem El Welily is a professional squash player from Egypt, currently ranked No. 1 in the world. Born in Alexandria, Raneem turned pro in 2002 and was named WISPA player of the year in both 2004 and 2005. She became the first Egyptian woman to reach a World No. 1 ranking in 2015, is a three-time finalist at the World Open, and became World Champion in 2017, after defeating Nour El Sherbini in the finals. Raneem lives in Cairo and is married to fellow Egyptian pro Tarek Momen. They were recognized by the Guinness World Records for becoming the first married couple in squash history to be crowned World Champions. 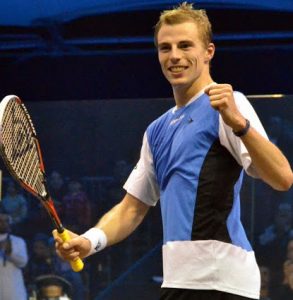 Watch Nick’s Q&A
April 29, 2020
Nick is a former English professional squash player who has achieved three of the sport’s singular honors three times apiece: World Champion, British Open, and Commonwealth Games. Nicknamed ‘the Wolf’ in honor of his merciless reputation on court, Nick is renowned for his athleticism, strength and fitness. He reached the World No. 1 ranking in 2010, which he held for a total of 19 months. Nick was selected by his fellow athletes to carry the English flag at the 2014 Commonwealth Games and is a Commonwealth Games England ambassador for the 2018 Gold Coast Commonwealth Games. 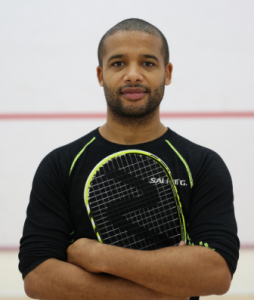 Watch Adrian’s Q&A
April 24, 2020
Adrian is a former English professional squash player from London. Adrian reached his highest ranking of No. 9 in the world in 2009 and has won multiple World Team and European Team Championships, a gold medal at the 2010 Commonwealth Games, and 18 PSA tournaments. Adrian currently runs the AG Squash Academy in New York City.

Watch Peter’s Q&A
April 17, 2020
Peter is a former professional squash player from Scotland, who represented first Scotland and then England in international squash. He became the first player from the UK to hold the World No. 1 ranking in 1998 and won one World Open title, two British Open titles, and four Commonwealth Games Gold Medals during his career. Since retiring, Peter opened the Nicol Squash Club in Providence, R.I. and has played a major role in the development and construction of the Manhattan Community Squash Center. Peter is a board member of CitySquash. 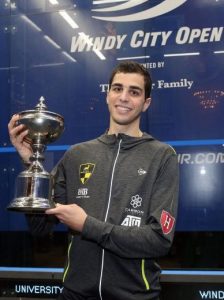 Watch Ali’s Q&A
April 15, 2020
Ali is a professional squash player who represents Egypt. Born in Cairo, Ali graduated from Harvard University in 2014 where he studied mechanical engineering and graduated as one of the best players in the college’s history, suffering only two defeats. He is the 2018/2019 World Champion and former World No. 1 (currently ranked No. 2). Ali is married to current women’s World No.3, Nour El Tayeb. 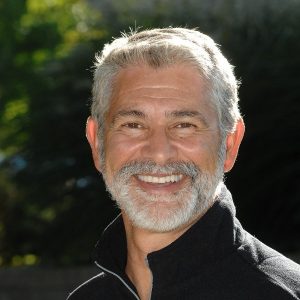 Watch Paul’s Q&A
April 8, 2020
Paul is the Men’s Squash and Tennis coach at Trinity College in Hartford, Connecticut, a professional speaker and author. As a two-time Olympic Coach-of-the-Year, World Championship Coach and the “winningest coach in college sports history,” Paul has motivated top athletes from around the world. He authored the book, Run to the Roar: Coaching to Overcome Fear, a reflection on leadership and mentoring. Paul is a 1974 graduate of Springfield College, holds a master’s degree from Long Island University and serves on the Capitol Squash Board of Directors. 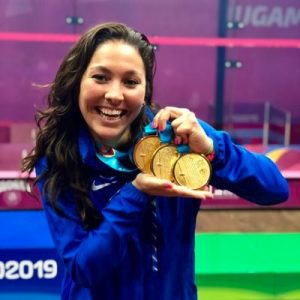 Watch Amanda’s Q&A
April 3, 2020
Amanda is the highest-ranked American professional squash player. A native of Sea Cliff, New York, Amanda won the World Junior Championships in 2010, becoming the first American to win the prestigious event. As a student at Harvard University, she won the National Intercollegiate Championships four times and did not lose a match during her four years. Amanda has reached a ranking of World No. 7 and won three gold medals at the 2014 Pan American Games. Known for giving back to the game, Amanda is a board member of US Squash and SEA, a mentor to a SquashBusters student, and regularly volunteers to play in exhibitions for SEA programs across the United States. Amanda resides in Boston and is an assistant coach at MIT.