Bates had the largest urban squash contingent, with seven players on their women’s and men’s teams. Coached by Pat Cosquer, a former Squash Director at StreetSquash, the Bobcats will be graduating three urban squashers this year in Captain Rakey Drammeh and Samantha Matos from StreetSquash and Ashley Brooks of SquashBusters. Junior Myriam Kelly of CitySquash earned her third 1st-Team All-NESCAC Selection and freshman Darrius Campbell, also of CitySquash, made 2nd Team All-NESCAC.

Franklin & Marshall had five urban squash players on its teams, while Connecticut College and Hobart had three players each, and Mt. Holyoke, St. Lawrence, Berkeley and Bucknell each had two urban squashers. San Diego’s Access Youth Academy has six players competing in college, including at Berkeley, Bowdoin, Dartmouth, Penn, and Columbia. The national champion Trinity women’s team had an urban squasher in CitySquash’s Katiria Sanchez, a sophomore for the Bantams.

The most decorated urban squash player is Cornell University’s captain Jesse Pacheco. A graduate of CitySquash, Jesse is a two-time All-American and finished this past season ranked 17th in the country.

NUSEA’s first overseas initiative will launch in January in the South American coastal city of Cartagena. Squash Urbano Colombia is the brainchild of Esteban Espinal, a former member of the Colombian Squash Team who has been a Director of Squash at CitySquash since 2009. NUSEA is underwriting SUC’s pre-launch costs and working with Espinal, who will return to Colombia to be SUC’s Executive Director, to secure funding and develop the organization. SUC will launch with 50 elementary students from a public school that is a 5-minute walk from a 7-court public squash facility built for the 2006 Central American and Caribbean Games. In addition to academic tutoring, Squash Urbano Colombia will have an intensive English language program for its students.

Responding to growing interest in urban squash outside of the United States, NUSEA amended its mission last year to include supporting the development of urban squash abroad. The organization will do so through student and staff exchanges, grant-making and fundraising, and the creation of new programs like Squash Urbano Colombia. NUSEA’s other prospective international partners include Urban Squash Toronto in Canada, Khelshala in Attawa, India, and Egolisquash in Johannesburg, each of which was launched independently of NUSEA in the past five years. If you are interested in developing urban squash outside of the United States, please Sage Ramadge at sage.ramadge@squashandeducation.org.

NUSEA’s 16th and 17th member programs will launch this summer in Hartford and Cincinnati, respectively. Capitol Squash operated a pilot program in Hartford for two years before its Board of Directors invited NUSEA in 2012 to lead a re-launch of the program. Now based exclusively at Trinity College, which boasts the country’s most dominant collegiate squash program, Capitol Squash will be led by newly appointed Executive Director Meg Taylor. A Glastonbury native who played squash at Vassar, Taylor is finishing her second year at a Washington, DC public school as a Teach For America Corps member. Capitol Squash will recruit 30 new students in September from M.D. Fox and the Burns School for Latino Studies, both of which are walking distance from Trinity’s campus.

In both Cincinnati and Hartford, NUSEA has played a leadership role in working with local leaders to secure funding, recruit board members and staff, and identify school partners. If you are interested in launching an urban squash program in your city, please contact us at info@squashandeducation.org.

Over the weekend of January 25th-26th, 390 urban squash players from across the country descended on Philadelphia to compete in the Urban Team Nationals, a 5 player team competition that is one of NUSEA’s two marquee events of the year. Oneof the largest junior tournaments in the country, the Urban Team Nationals rotates between Boston, New York and Philadelphia, and this year it was jointly hosted by SquashSmarts, Drexel University, and the University of Pennsylvania. Three programs walked away with all of the weekend’s titles, with CitySquash taking the BU13, StreetSquash winning the GU19 and both U17 draws, and Squash Haven claiming the remaining four titles.

A big thanks to the staff from SquashSmarts who ran the show over the weekend: Chris Wert, Sakora Miller, and Mithun Das for the squash tournament and Katie Regetta who oversaw the essay contest. Our gratitude goes to Drexel University, University of Pennsylvania, and to SquashSmarts for hosting the event. We look forward to next January, when the Urban Team Nationals returns to New York City!

Sakora Miller remembers being puzzled when strangers visited her gym class in tough west Philadelphia and offered to teach the kids a sport.

Everyone already knew how to play basketball, the most popular game in the neighborhood, she recalled thinking. What else is there?

But a funny thing happened: Miller turned out to be pretty good at squash. She has just become the first graduate hired full time at SquashSmarts, the after-school program she joined as a seventh-grader in 2004. 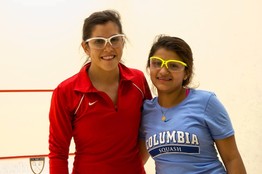 An athletic competition between Cornell and Columbia this past weekend featured two star players who share an inner-city upbringing of the sort that’s rare in the Ivy League. Most extraordinary, however, is what these young women play — squash, that bastion of the privileged.

Reyna Pacheco grew up an illegal immigrant, sleeping on floors and sofas in a rough section of San Diego after her mother fled Mexico with no money and no job. Now she’s one of the highest-seeded squash players at Columbia University. Jesse Pacheco (they are not related) is the current captain of the Cornell team and an All-American, currently ranked 14th in the country. She’s from the Bronx, the daughter of a single mother from Ecuador who lost her job when Jesse was in middle school. 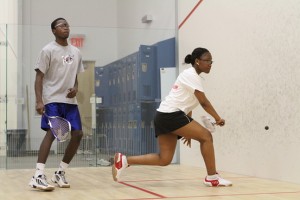 In uptown New York City, Harlem kids are invited to dart around StreetSquash’ 19,000 square-foot facility. The nonprofit is essentially a dedicated after-school tutoring program that also teaches its participants, ages 11 to 18, the ins-and-outs of squash. The sport is generally associated with stuffy country clubs and most of the StreetSquashers had never heard of the sport prior to joining the program. An unlikely pairing, it’s nonetheless proven relatively successful.

Out on the squash courts, sneakers screech and racquets lob, volley and drive shots smartly against walls. The kids laugh, yell and socialize. But in the facility’s quiet backrooms, the real work is being done. Students, grades 6 to 12, are prompted by supervising adults to keep-up on their academics. These advisors drill students on everything from mathematics to general literacy, in preparation for college, and communicate with the students’ public school teachers throughout the week, so students stay on the ball.

30 student-athletes at the US Open Squad in Philadelphia in October.

The US Open Squash Championships returned to Philadelphia in October, drawing fans from across the globe to watch the best men’s and women’s professionals compete for the title. Among the attendees were 30 urban squash players who took part in four days of intensive training as part of the U.S. Open Squad.

Organized by NUSEA and held at the SquashSmarts Lenfest Center from October 11-14, the urban squashers were selected from nine member programs across the country. The players were put through their paces by Access Youth Academy Executive Director Renato Paiva, NUSEA Project Manager Sat Seshadri, Access Youth Academy’s Yuri Franca, and Racquet Up Detroit’s Emma Head. Three urban squash college students assisted: Terrance Rose (Guttman College CUNY, ’16) and Jazmin Matos (F&M ’16) from StreetSquash, and Manuela Perez (Barnard ’16) from CitySquash. A highlight of the weekend was when the students got a chance to show off their skills on the exhibition court after meeting with world #5 James Willstrop and world #1 Nicol David. 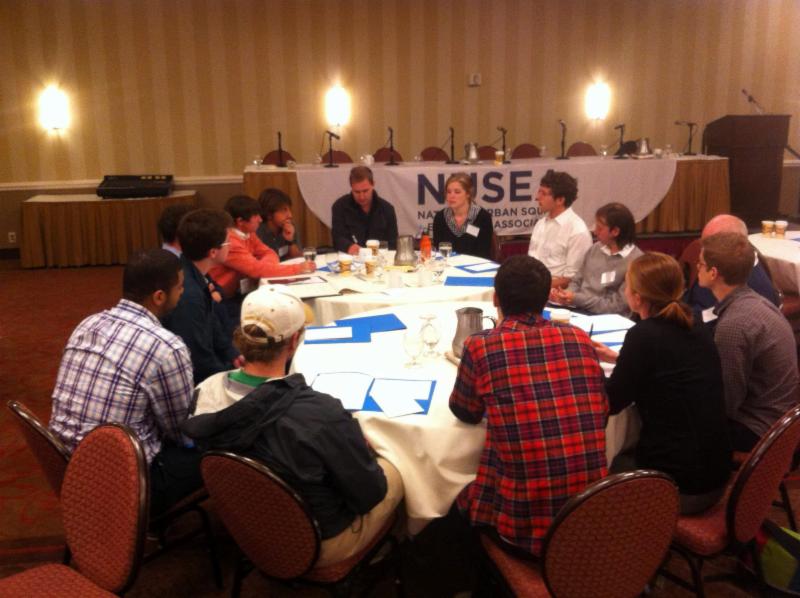 Not content to let the student-athletes have all of the fun, 75 staff members from 15 programs met in Philadelphia for the 2nd NUSEA Retreat. On October 15th and 16th, seasoned professionals from established programs, recent hires, and directors from start up programs had a chance to connect away from the usual buzz of the squash courts and classrooms, to share best practices and experiences from their work. US Squash CEO Kevin Klipstein delivered the keynote address on Wednesday, speaking about the growth of the sport in the US and the positive role that urban squash plays in the sport’s development. The two days included panel discussions, presentations and breakouts groups and topics included mentoring, academic support, college placement, squash instruction, events, fundraising, and more.

On Saturday October 19th, five urban squash programs from across the Northeast came to Payne Whitney Gymnasium at Yale University for a spirited day of team competition. Participating programs included SquashBusters from Boston and Lawrence, Squash Wise from Baltimore, StreetSquash from Harlem, StreetSquash Newark, CitySquash from the Bronx, and of course the hometown Squash Haven program. The finals of each category — U13s and U15s — featured CitySquash versus the hometown favorites. Squash Haven swept every division. Most dramatically, the Boys under 15s ended up coming down to the Number 5’s and Franki Velzquez from Squash Haven pulled out the win in the five games.