Last month, Squash Haven high school senior MD Jawad earned All-American honors from U.S. Squash for the second consecutive year, an honor bestowed on high school players based on their national ranking or by their league. Jawad, having reached a ranking of #33 in the country in the Boys Under 17 division, is one of the strongest players to come out of the New Haven-based program. After graduating this spring, he will go on to Connecticut College, where he will join three of his Squash Haven teammates.

Jawad’s squash accomplishments are vast, but he is not alone in his success on court. This January, Squash Haven tied with CitySquash for the most titles at Urban Team Nationals in New York, with each program winning three divisions. In February, the program competed in High School Nationals, where the girls finished 21st in the country, marking the highest rank of any SEA program in history. This year, 11 Squash Haven students competed on their collegiate teams, with two of those students playing in the number one position. Osuman Imoro, a first-year at Dickinson College, went undefeated the entire season in the #7 position. 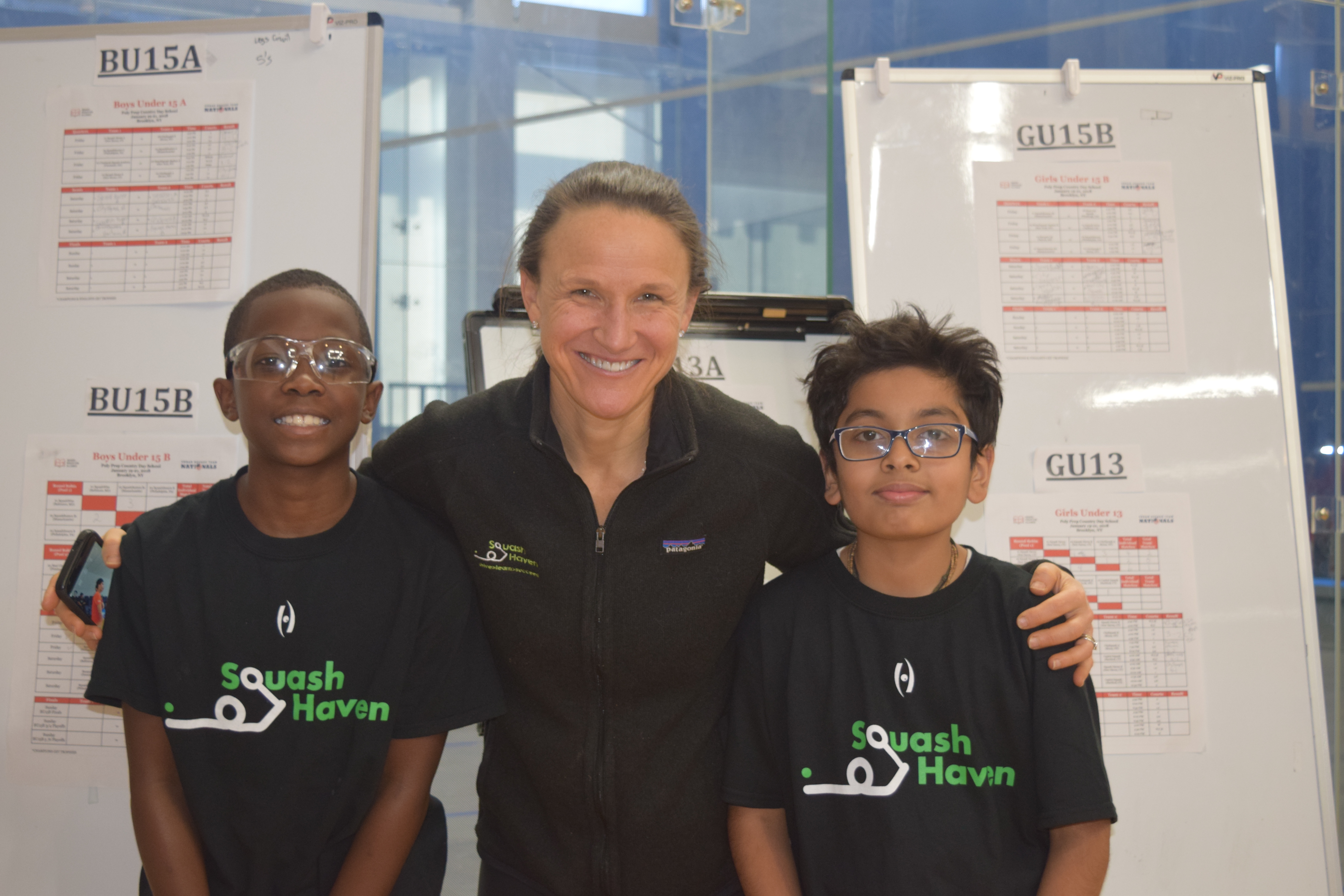 Squash Haven, launched in 2007, has been led by Executive Director Julie Greenwood since its inception. This year, Squash Haven enrolled 100 students in grades 5-12. Greenwood acknowledges the program’s emphasis on squash and the way that it compliments the overall aims of the program. “It very much fits in with our mission, which is to support young people in realizing their best abilities in every aspect of their lives,” Greenwood shares. “Squash is a really good way to teach them that.” Greenwood explains the specific approach that the organization takes when it comes to squash development. “There are lots of things we can do through the sport, like helping kids improve fitness, having fun, and building teamwork. At the end of the day, our kids are playing a lot of squash. If you’re going to do anything with that much of your time, try to do it to the best of your ability.” 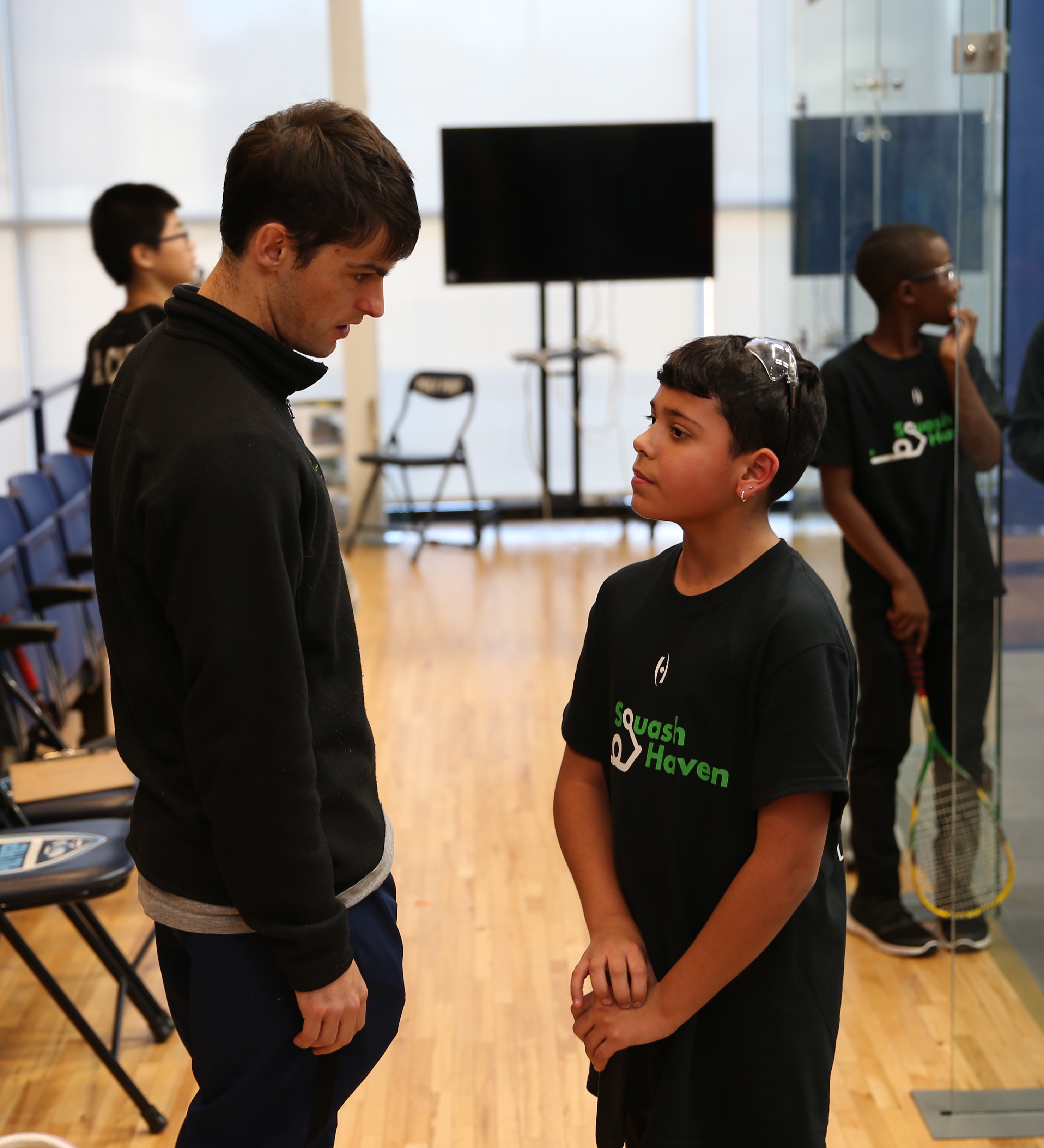 Greenwood has been leading the charge for the last eleven years, but she credits her team with helping to grow and sustain the quality of the overall organization in every aspect of their work. John DeWitt has been Squash Haven’s Squash Director for the past nine years, and has seen the growth of the squash program firsthand. “I think the pieces have always been in place for us to have success in squash,” DeWitt reflects. “I took over the squash program in 2009, which was Squash Haven’s third year. That year we won three out of the six SEA team championships. I think that was our coming-out tournament as a squash program. Ever since then we have consistently won several team championships at every SEA Nationals.” DeWitt takes great pride in the squash achievements of the organization. “From my count, we have won 28 ‘A draw’ SEA team championships since 2010 and next year it looks like we will have 17 alumni playing on college squash teams. Despite being one of the smaller of the more established SEA programs, both in terms of students and budget, I am proud that we stand out in SEA with our squash results.”

DeWitt goes on to explain that despite the program’s trophies and other accolades, Squash Haven’s most important internal benchmark is how the students who are not the highest on the ladder perform and experience the program. “In terms of skills, we try to measure our squash program not by the ability level of our strongest players but by that of our weakest players,” DeWitt shares. “I have always done my best to make sure that even the lowest players on our ladder receive strong technical coaching, are educated about the rules of the game, and have significant experience competing in matches and tournaments. What has always been most important for me to stress to our kids is not how high they play on our team, but to make sure they are having a fun, healthy, and positive experience coming to squash practice every day.”

Squash Haven places great value on providing competitive opportunities to its players. At the beginning of each program year, DeWitt and the other squash staff sit down and organize the season around all of the matches and tournaments that they plan to have the students play. Clearly, the planning and foresight pays off; in the 2016-2017 season, Squash Haven students competed in 60 squash competitions in addition to weekly internal challenge matches. A number of these competitions were matches within the FairWest League, in which Squash Haven enters a JV and Varsity team for both the boys’ and girls’ sides.

Owen Butler, who joined the Squash Haven squash staff in 2013, realizes the importance of providing students with these opportunities. “The matches and tournaments are really important for player development,” shares Butler. “In those matches, we can see the flaws and the things that students need to work on in practice.” Butler goes on to explain that following weekend competitions, the squash staff come together and analyze the students’ games, basing upcoming practice sessions on information gathered during match and tournament play. “The matches and tournaments give us a chance to deliver a lot of individualized feedback to the students, both on their strengths and their areas for improvement. We make sure to highlight the good things that we see at practice, as that opens the door and allows us the opportunity to also deliver the critical feedback. The balance helps the students understand that we’re really on their side and want them to excel.”

In addition to strong leadership and a committed staff, Squash Haven has another major asset that they use to their full advantage — a home at Yale University. Based out of Payne Whitney Gymnasium, Squash Haven uses a classroom in the facility for studying, homework, and academic enrichment, and the squash courts for their practice sessions.  “With access to the Yale courts, we can allow students to come in on their off days,” Greenwood shares. “If kids want to train five days a week, they can do that.” Greenwood goes on to remark on the other benefits of having so many courts at their disposal. “Most days our kids can practice with 2 or 3 players on a court. Not everyone has that capability. If you do the math, our kids are just hitting more balls than most kids in other programs.” Butler agrees that there is a direct link between court access and player development. “We have the opportunity to spread the kids out to hit by themselves,” Butler shares. “For an SEA program to be able to solo practice with 10-15 kids is amazing. I don’t know if a lot of other programs can do that.”

It’s not only the Yale facilities that are an asset to Squash Haven, but the people there make a meaningful contribution as well. Varsity Squash Coach Dave Talbott is a board member and advocate of the program, and members of his team volunteer with the program daily. “We are incredibly fortunate,” Greenwood reflects. “We don’t have to struggle for squash volunteers, and our kids play out of a facility where they can regularly see what high level squash looks like.” DeWitt agrees. “The access to 15 courts as well as having the Yale team members as volunteers gives our students a unique opportunity compared to other SEA programs,” DeWitt explains. “Our students can come to Squash Haven and receive a high quality squash session every day of the week.” 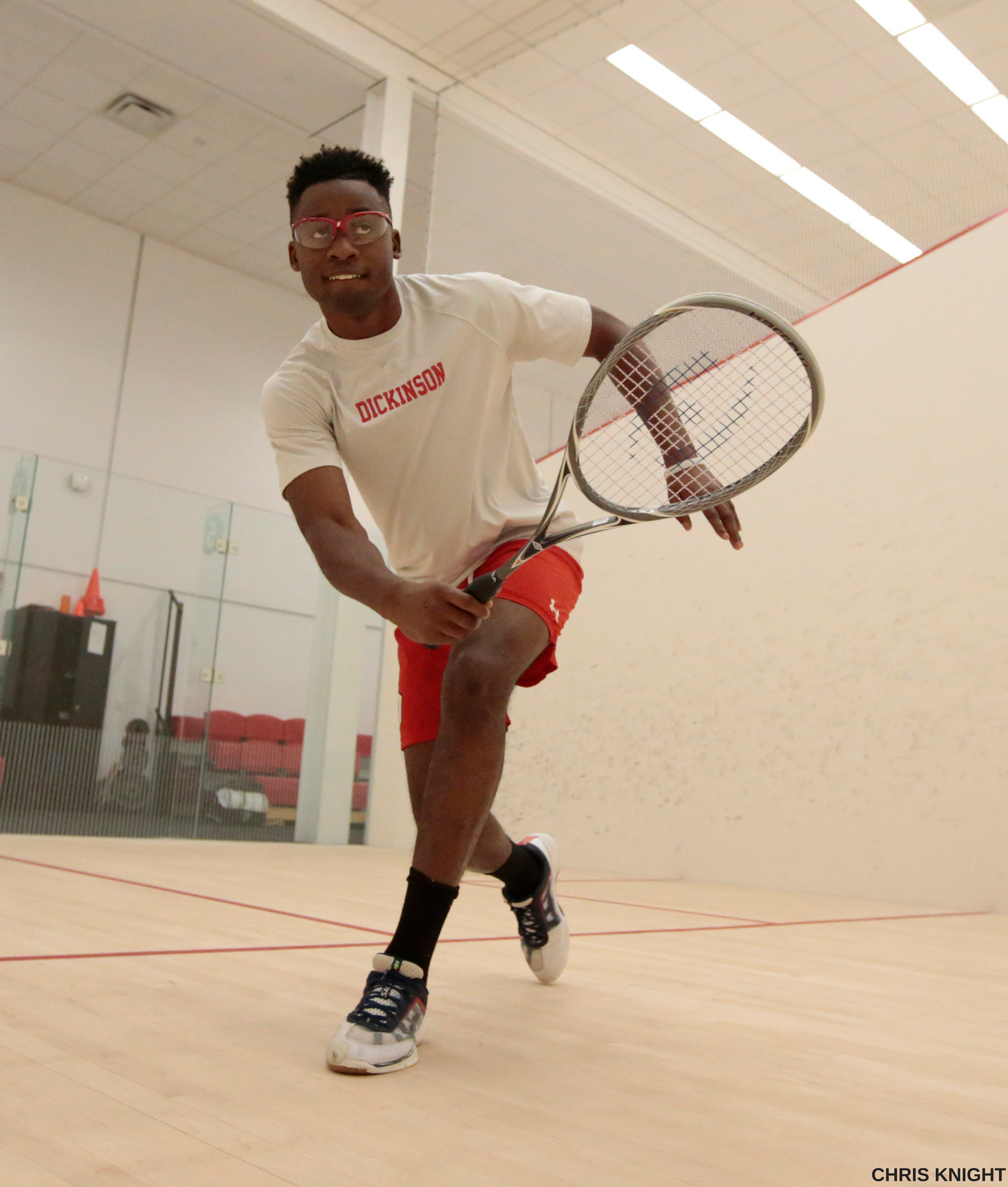 Osuman Imoro has taken full advantage of all that Squash Haven has to offer. Imoro is completing his first year at Dickinson College, where he went undefeated through the entire squash season. While at Squash Haven, Imoro reached a career high of #13 in the country in the Boys Under 17 age group. Imoro, now competing on both the soccer and squash teams at Dickinson, came to the program with indisputable natural athletic talent. “Osuman is by far the most athletically gifted student I have ever had at Squash Haven,” DeWitt recalls. “He is lightning fast and has fantastic hands. Besides his talent, Osuman is also far and away the best natural competitor that I have ever coached. He is cool under pressure, believes in himself, and hates to lose.”

Imoro acknowledges his talent, but gives credit to Squash Haven for pushing him and helping him to excel. “With the help of my coaches I was able to use my abilities,” Imoro reflects. “It’s all about my coaches and being put in the right peoples’ hands. John was a great coach, and the whole staff really pushed me. It wasn’t just about squash, it was also about academics. They want you to do well on the court and in the classroom. Having people to motivate me really got me to the place where I am now.”

In achieving his record-high rankings (Imoro also rose to #17 in the Boys Under 15 category), Imoro played many U.S. Squash events outside of the urban squash realm. “It felt good playing competitive squash outside of the team, going places that I had never thought about going, playing such a high level of squash,” Imoro recalls. “It was a very special moment in my life. I’m always about hard work, because hard work takes you really far. I’m really proud of how far I’ve come playing squash and going to those big tournaments that I never thought about going to.”

Perhaps more than his individual success, Imoro is proud of how many of his peers are now playing college squash. “It makes me happy, because coming from where we come from, a lot of people don’t expect us to be where are, and for us to go to a really good school and play for a really good squash team,” Imoro shares. “It means a lot. People get to see who we are and what we can do. I’m really happy when I see other kids from not just my program, but urban squash in general.”

Imoro appreciates Squash Haven, not only for helping him to become one of the strongest players in the program’s history, but for all that they have done to support his journey. “I’m really, really grateful to be a part of Squash Haven,” Imoro explains. “To be honest, I don’t know where I was going to end up without Squash Haven. The program led me to a great path, and I’m really happy that I got to join; there aren’t a lot of programs like that from where I come from.”