SquashBusters, founded in Boston in 1996 as the first squash and education program, has officially expanded to a third program site. On December 9, the program held a ribbon-cutting ceremony in Providence, RI, in conjunction with Moses Brown School. SquashBusters has partnered with the private school to open a 12-court facility, the Gorgi Family Squash & Education Center. Boasting 11 singles courts and one doubles court in addition to classrooms and locker rooms, the facility is now the largest urban squash facility in the country. 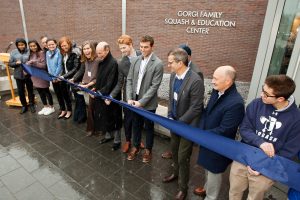 SquashBusters is now serving more cities than any other squash and education program. At its flagship location, SquashBusters partners with Northeastern University, where the program has an eight court facility, classrooms, and administrative offices. The program’s expansion to Lawrence in 2012 has proven successful, with 105 students enrolled, and facility partnerships with Brooks School and Phillips Academy. Now, with its move into Providence, SquashBusters plans to serve even more participants.

This fall, Caitlin Barrett came on as the Providence Executive Director. Barrett comes to SquashBusters after spending seven years working with Up2Us Sports, where she was the National Director of Training. Barrett was thrilled to be offered the opportunity to move to Providence, “I have been a fan of SquashBusters for so long. The squash and education programs in general run such high quality programs, and I am excited to do something new with this incredible model and legacy.”

In its first year, SquashBusters Providence will serve 28 sixth-graders from DelSesto Middle School. The program plans to add one class each year through 12th grade, which will result in an enrollment of 110 students. Two additional staff have been hired in squash director and academic manager roles.

SquashBusters Providence shares the Gorgi Center with Moses Brown and the Nicol Squash Club, run by former world champion Peter Nicol and Arthur Gaskin, former world #80 and current head pro at the facility. Since the opening of the courts, the Moses Brown team has seen an increase of 100% in student participation. Between the three programs, the courts are getting quite a bit of use, and the energy in the building is consistently high. “It’s just the best,” commented Barrett, “The kids really see it as an amazing home in which to be playing squash and studying. It is such an investment in the squash community in Rhode Island in general, and it is exciting to be a part of such a hub of squash and education and youth development for the state and the region as well.” 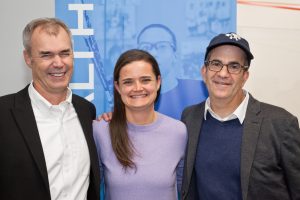