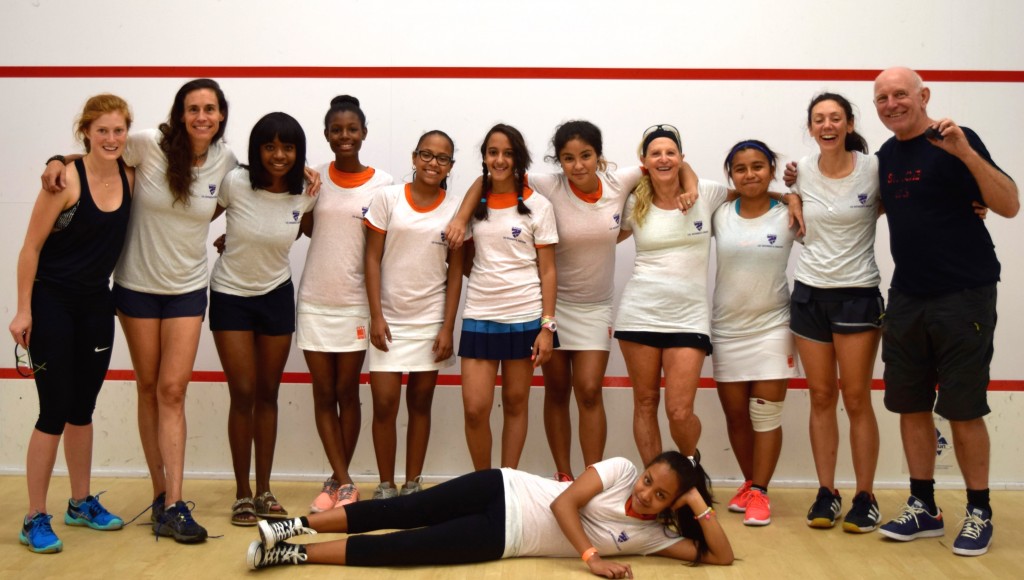 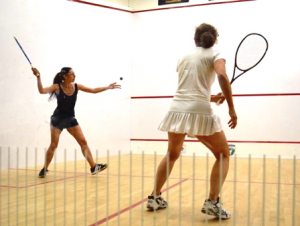 Over the past month, St. Luke’s Squash Directors and SquashRx leaders, Lucia Cantarini and Brian Mathias have proven their incredible commitment to supporting urban squash with two inspiring events. On Saturday, September 19, Lucia Cantarini and Brian Mathias opened the doors of St. Luke’s Squash Club for a women’s tournament, to raise awareness for NUSEA’s upcoming Girls Excellence Initiative. The Girls Excellence Initiative will launch to promote our young women’s squash, academics, and professional pursuits, so this tournament was a perfect nick. On October 6, Brian and Lucia held an exhibition match between World No. 4 Camille Serme and World No. 8 Nour El Tayeb, also to benefit urban squash.

Tournament directors Lucia Cantarini and Brian Mathias each have an impressive squash background. Lucia, a native Italian and former member of the Italian Women’s National Team, coaches for the St. Luke’s squash program. Brian played pro squash until 1998 and now runs the squash program at both the River Club of New York and St. Luke’s School.

The September women’s tournament featured players ranging from ages 14 to 60, and even included a group of CitySquash girls who made the trip from the Bronx. Lucia and Brian created a six-team draw, mixing St. Luke’s girls and CitySquash girls with enthusiastic women players. Matches were best-out-of-three, and each player had three matches. 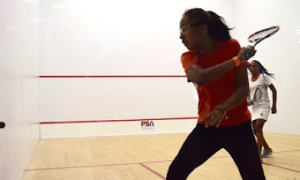 The victorious team of the tournament was Team Drive, made up of Jane Segall, Laura Howells, Rochelle Hudson, and Mirel Roig. Squash Director Bryan Patterson, who traveled to Connecticut with his group of CitySquash girls, highly praised the event. “The fact that it was an interesting format where you had women playing students was even better,” said Patterson. 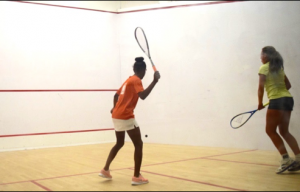 Tita Hicks readies for the kill

CitySquash girls were once again in attendance, as Bryan Patterson brought a small group to St. Luke’s to view this international competition. During the match, El Tayeb and Serme showed off their skilled hands with risky shots, drop wars, and incredible reaction shots. Between games, they answered questions about their strategy, including the importance of a good lob and their fitness routine. The players’ fitness and finesse left an impression on the CitySquash girls, who noted to Patterson, “they are so quick around the court, and their swing is so smooth!” After the match, CitySquash student Maya Lopez practiced her French with Serme, and the group all received signed posters from both players. 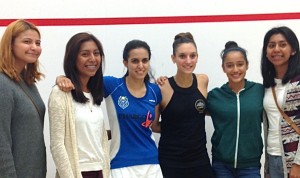 These two events invigorated and inspired our young women by exposing them to intensive squash events and incredible female role models. We cannot thank Lucia and Brian enough for all of their efforts.

To see more photos of the tournament, please visit our smugmug page!