NUSEA’s inaugural Citizenship Tour took twenty-two civically-minded and academically-accomplished high school and college students from across the country on a 9-day trip that began in Boston and ended in Washington, DC. With stops in Greenwich, CT, New York City, the Jersey Shore, and Philadelphia, the tour was an intellectual and athletic journey through the halls of power, the landmarks of American history, and some of the country’s oldest universities.

For Benny Sanquintin of SquashBusters, it was a “dream come true to meet these great politicians and learn how they approach different problems in society.”

Special thanks to the Tour’s senior staff — Sage Ramadge, Rachel Hallowell, and Monete Johnson — and the four urban squash alumni who served as counselors. An additional thank you to the Citizenship Tour Committee, to Jenny and Will Gaynor for hosting a wonderful reception in Washington, DC, and to our many other supporters for making this incredible trip possible.

120 urban squash players from Baltimore, Cleveland, Chicago, Denver, Detroit, Philadelphia, and the Bronx traveled to Gambier, Ohio for the 2nd Annual Midwest Urban Squash Championships. Hosted by Kenyon College from July 24-27, the tournament showcased the talent of our growing number of programs in the region.

Beyond the squash competition, players got an early glimpse of college life by staying on Kenyon’s beautiful campus. “Kenyon was a terrific host,” explained Tim Wyant, Executive Director of NUSEA. “It was exciting to see so many students from our Midwestern programs compete in a major NUSEA event.”

Special thanks to our Kenyon Committee, to Tournament Director Mike MacDonald from METROsquash, and to all of our supporters who made the tournament possible.

For the second summer in a row, Phillips Exeter Academy generously granted scholarships to ten of urban squash’s most promising students to study at its summer school. The urban squashers joined over 700 middle and high school students from around the world for five weeks of academic study, athletics, and exploration in Exeter, New Hampshire. In addition to intensive academic coursework, participants had the chance to play squash in Exeter’s world-class ten-court facility.

“The Exeter Summer School opportunity has been a game-changer for our students,” explained Derek Aguirre, Racquet Up Executive Director. “NUSEA is uniquely positioned to link programs like ours and institutions like Exeter. Racquet Up Detroit students have been the lucky beneficiaries of this high-level relationship building and have had their eyes opened to a much wider world.”

A big thanks to Ethan Shapiro at Exeter and our Exeter Committee that rallied support for the summer program. 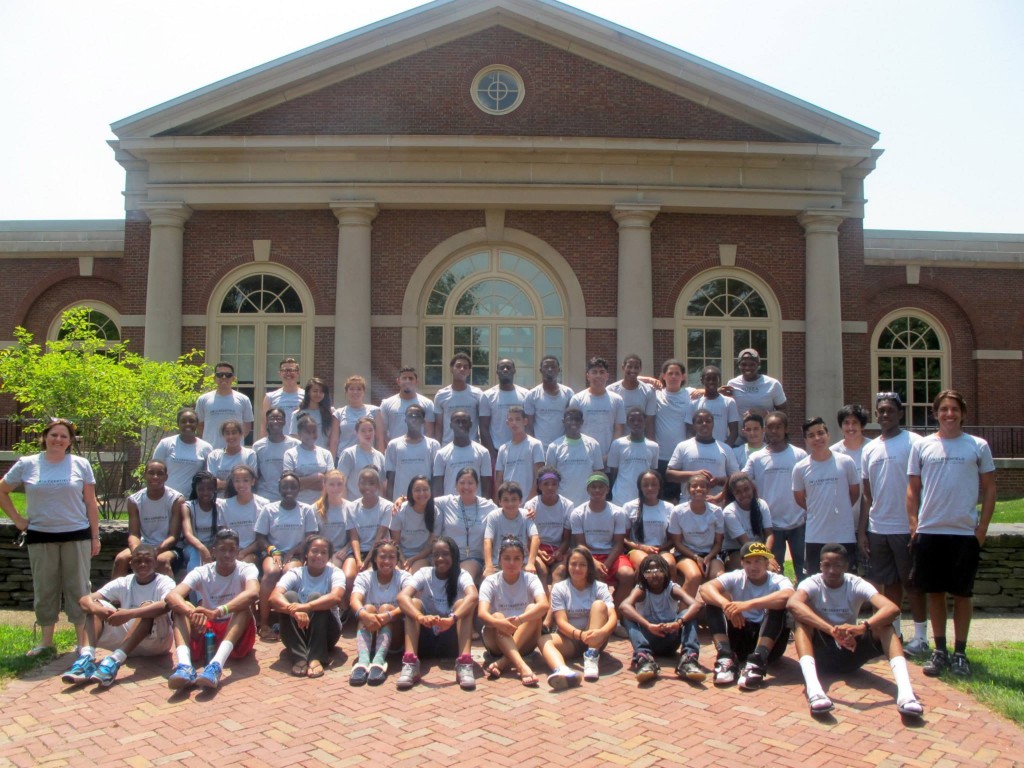 Urban squash’s top squash players at Deerfield Academy in July.From June 29 to July 2, students from eleven NUSEA member programs based themselves at Deerfield Academy and the Eaglebrook School for the 2nd Annual Deerfield Summer Squad, an elite squash training program for urban squash participants. Forty-five girls and boys spent an intensive four days training under the guidance of staff members Yuri Franca and Christine Trinidad from Access Youth Academy, Emma Head from Racquet Up, and seven urban squash alumni who worked as counselors for the camp.

In addition to playing on the combined sixteen courts of Deerfield and the Eaglebrook, the students were exposed to the boarding school experience at Deerfield and Eaglebrook, staying overnight in dorms and fueling up in the dining halls. “It was inspiring to see so many dedicated urban squashers training hard together to improve and succeed at squash,” noted Sage Ramadge, Deputy Director of NUSEA. “Everyone enjoyed the chance to forge new friendships and rivalries that will last for many years both on and off the squash courts.”

Our thanks to Deerfield and Eaglebrook, to our Deerfield Committee, and to the sponsors who made the camp possible.

The four-day event was led by Stanford Head Coach Mark Talbott, NUSEA squash staff Yuri Franca and Christine Trinidad of Access Youth Academy, Lauren Patrizio and Rachel Fine of SquashDrive, Derek Aguirre of Racquet Up Detroit and assisted by alumni of urban squash programs and Stanford University squash players. “It was such an exciting opportunity to help with the first NUSEA camp on the West Coast,” squash director Yuri Franca said. “We trained for four days with great coaches in one of the best universities in the United States.”

A huge thank you to Stanford University, to our Stanford Committee, and to all who contributed to this inaugural event.