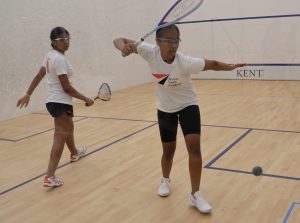 In July and August, eighty-four middle and high school students from 16 U.S. member programs participated in SEA’s Summer Academy at Kent School. Consisting of two five-day sessions and an intensive three-week session, the camp was an expansion of last year’s four-week Academy at Kent and offered both educational and squash activities. The camp was led by StreetSquash alumnus Raheem Logan and SEA Director of Squash and CitySquash alumnus Edgardo Gonzalez.

“Five weeks of the SEA Summer Academy provided players of all levels an opportunity to expand their horizons, gain confidence in themselves and gave them a glimpse to their role in the bigger picture of SEA,” says Camp Director Raheem Logan. “The different coaches across the weeks all approached the game (and their respective subjects) from different angles which allowed us all to grow in the process. The teams collaborated to provide the best experience for the young people.”

Spots for the camp’s final three-week session were reserved for members of SEA’s Development and National High Performance Teams, a group of students who rank in the top seven in their age group across the SEA network. Longtime former Dartmouth Head Coach Hansi Weins joined the staff for the final three-week session, coaching players from Boston, Buffalo, Cincinnati, Hartford, New Haven, New York City, Philadelphia, Portland, Providence, and San Diego. In addition to squash training, students participated in daily classes, with a focus on the humanities and STEM.

“This camp offered a great mix of academics and squash,” says Coach Hansi Weins. “Because we had three weeks with the campers we could not only spend a lot of time laying the groundwork and making incremental improvements to technique, footwork, and mental aspects of the game, but it was also incredibly rewarding for us coaches to see those improvements take hold and play out at the end of the session.”